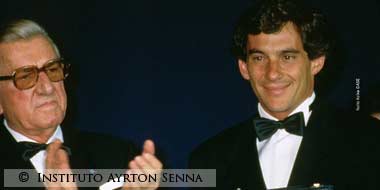 FISA President Jean-Marie Balestre recently suggested that “prestigious heads may risk a fall” over the Suzuka affair. At a press conference in Paris last week Balestre launched a further attack in the extraordinary battle of wills between FISA and McLaren. Ayrton Senna will not be given a Superlicence unless he publicly withdraws statements he made about the outcome of last year’s Formula 1 World Championship.

The Brazilian had suggested that the FISA, the FIA and the International Court of Appeal had manipulated the outcome of the World Championship and that Alain Prost was an artificial World Champion. It is most unlikely that Senna will back down. In December, the World Motorsport Council summoned the Brazilian to appear before it.

“We gave him a complete dossier listing every statement made in the previous days,” said Balestre. The council was to meet on Thursday, December 7, but Balestre and Senna met the day before.

“I proposed to him (Senna) to see him on the Wednesday night and had a one hour tete-a-tete with him,” said Balestre. “The secretary general of FISA (Yvon Leon) was also there.”

Balestre tried to convince Senna that the President had been acting in good faith and proposed to make peace. “It was a very unpleasant interview,” said Balestre.

“The President had to deal with a man full of contempt and arrogance, who used other methods that required great patience from the President, who never lost his calm. The attempt made was to no avail.” Next day Senna appeared before the World Motorsport Council. The council spent 90 minutes analysing Senna’s statements. “Every fact was presented,” said Balestre. “Unquestionable evidence was presented to him that the FISA President never took any action against him. The evidence was provided and everything was recorded on tape.

“Mr Senna hardly spoke, nor did his lawyer and, to be truthful, it made the World Council rather irritated.”

Senna then left Paris, refusing to comment on what had happened. In the WMSC meeting the FIA deputy president Roman Pijanowski took the floor and expressed his displeasure at what he saw as a role-reversal with World Motorsport Council behaving as though it had to justify itself to a driver. Balestre defended this, saying that he thought it essential to demonstrate to the public that Senna’s statements were untrue. According to Balestre, the WMSC then voted to refuse Senna’s application for a Superlicence unless he withdrew the allegations. In his press conference, Balestre said that the vote against Senna was unanimous, although the President indicated that he had abstained.

Given a valid WMSC vote, FISA is quite entitled to take action against someone who attacks the governing body. In applying for his Superlicence, each driver has to fill in a form which states that the driver must abide by every rule of the sporting code and every decision of the sporting authorities. Article 29 of the FIA Statutes is quite clear on this: “The World Motorsport Council may directly impose the sanctions provided for in the International Sporting Code of licence holders who by words, deeds or writings have inflicted moral injury and loss on the FIA, the FISA, their members or their executive officers.” Article 58 of the International Sporting Code backs this up: “Every person, or group of persons, organising a competition or taking part therein: (1) shall be deemed to be acquainted with the statutes and regulations of the FIA and the FISA, this code and the national regulations; (2) shall undertake to submit themselves without reserve to the above and to the decisions of the sporting authority and to the consequences resulting therefrom. In case of non-compliance with these provisions, any person or group or group which organises a competition or takes part therein, will have the licence which has been issued to him withdrawn, and any manufacturer shall be excluded from the FIA Championships on a temporary or permanent basis.”

The WMSC has chosen a temporary exclusion, conditional on Senna making a public statement that all his statements are wrong and to the detriment of FISA. In the Le Mans dispute, FISA and Balestre have taken action against damaging statements made by a magazine. To date, the authorities in Paris have taken no legal action against the statements made by Senna. Asked about the various laws worldwide which protect the individual against being restricted from working, Balestre was adamant.

“He can be a Formula 3000 driver,” said the President. It was then suggested that Senna and McLaren could obtain an injunction to stop the running of the American Grand Prix at Phoenix until a court could hear a case concerning the right to work legislation.

Reaction to the FISA ruling has been muted. Ron Dennis, speaking at last week’s Shell Awards, was not keen to comment.

“I spoke to Ayrton for two hours last night,” he said, “and I can assure you that he (Ayrton) will be racing this season. I am not sure of the circumstances between now and then. I don’t want to say any more.

“It’s been a year of turmoil for motor sport, throughout the sport. It is a fantastic sport, it means a lot to us. Sometimes we have to grin and bear it.” There remains the question of whether McLaren is to pursue its civil action against the FIA and the FISA because of the decision of the International Court of Appeal. Will the team pursue that action? “It’s difficult to answer accurately or honestly,” said Dennis.

“The important thing is to compete and do the job well.” Dennis acknowledged that he had to respect the views of the companies involved with McLaren and finally admitted that: “We haven’t decided.” Senna has been keeping a low profile. In the wake of Balestre’s announcement, he had retired to a private beach at Angra dos Reis in Brazil.

He was refusing to make any comment at all. There are six possible courses of action in the dispute. Senna could back down as requested (although this is considered extremely unlikely) and retract his statements. Balestre could withdraw from his position although, similarly, he now appears to be entrenched on the issue. Senna may decide to retire and turn his back on the whole business, although this, too, seems doubtful as he clearly feels he has a point to prove.

There have been suggestions that he could compete this year in CART, which would mean he would not have to retract his statements and would remain in competition. Such a move would certainly damage Balestre’s credibility and would give Senna and McLaren time to pursue their legal actions. The fifth possibility is that a deal could be struck between the various parties. This, however, is improbable as Balestre tried this on December 6 and, quite obviously, Senna was not interested in burying the matter.

The final possibility, and the most radical, is that Balestre could be overruled by the FISA Plenary Conference. Balestre’s position is not as strong as it has been. He is involved with battles with both Senna and Le Mans. Excluding Senna from the World Championship is certain to undermine his support among the South American members of the FISA. At the same time the dispute threatening Le Mans is upsetting many manufacturers who have important voices among the national sporting authorities which comprise the FISA membership. The issue could be forced if an emergency general meeting of the Plenary Conference is called.

This is achieved when at least one-third of the members of the Plenary request a meeting. The Plenary Conference has the power to overturn decisions made by the WMSC. Were this to happen, Balestre’s position as President of FISA would undoubtedly be called into question The possible disruption of the Formula 1 World Championship would not sit well with the commercial interests involved in Grand Prix racing and it is unlikely that such a thing would occur without action being taken. Balestre’s Paris press conference, while dramatic, merely set out the guidelines by which the dispute will be fought in the coming weeks.

A timetable of events

Sunday, October 22: Alain Prost and Ayrton Senna collide on lap 47 of the Japanese Grand Prix. The Brazilian rejoins, wins the race, but is disqualified. McLaren appeals against the decision. Prost’s World Championship is provisional.

Friday, October 27: McLaren’s appeal is heard in Paris by the FIA International Court of Appeal (TAI) The court decides to “prolong its reflection and deliberation until Monday”.

Tuesday, October 31: TAI judgement revealed. Senna is fined US$100,000 and given a six-month licence suspension, suspended for six months.

Wednesday, November 2: Senna is openly critical of Balestre, FISA and TAI in a press conference in Adelaide. Balestre issues details of previous attempts to challenge FISA and FIA authority in the civil courts.

Sunday, November 5: Balestre states that “a few heads, even prestigious ones, will risk a fall” over the Suzuka affair.

Wednesday, December 6: Senna and Balestre meet in Paris to discuss the affair. A dispute results.

Thursday, December 7: Senna appears before World Motorsports Council and is asked to explain why he suggested publicly that the 1989 World Championship was “manipulated”. WMSC reportedly votes unanimously to remove Senna’s superlicence

Wednesday, January 10: Balestre announces that Senna will not be granted a superlicence unless he publicly withdraws the statements he made about the World Championship being manipulated.