Ayrton Senna may be best known for his Formula 1 exploits, though some may not know of his association to Audi through business and also as a daily driver. Looking back on that side of this great racing driver offers often unseen insight into his life off the track, and also to the initial history of Audi do Brasil (Audi Brazil).

The history of Audi Brazil began on November 18, 1993 when Senna, then three-time Formula One world champion, signed a cooperation agreement in Ingolstadt between his family’s company Senna Import and Audi AG. In doing this, Ayrton Senna locked in both importation and sale of Audi automobiles for the Brazilian market, business that began in March 1994. 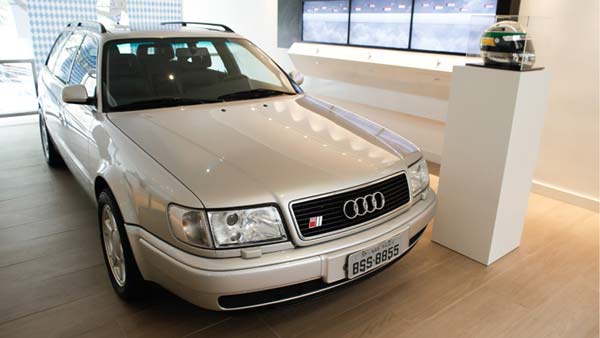 The tie between Ayrton Senna and Audi officially kicked off in April 1994 with an event held at the Varig at the Congonhas Airport in Sao Paulo on the Monday after that Grand Prix of Brazil. On the following day, Senna shared these new Audi models with journalists at an event held at the Interlagos Circuit.

Given the momentum the Audi brand has today worldwide, this may sound like an easy decision to make, but the realities of 1994 made things more of a challenge. At that time, the Audi brand was virtually unknown in the Brazilian market. Fortunately for Senna, the combination of dynamic products and aggressive market positioning began to pay off. The brand quickly began to take off and soon became an undisputed commercial success.

At the time, Ayrton took a 1994 Audi S4 as his daily ride. Today these cars are referred to as the “ur S4”, denoting Audi’s older post-war naming practices and today part of the lineage of the S6. Specifically, Senna’s S4 was a silver Avant with optional Avus alloys as seen above on display last year at the Audi Lounge Sao Paulo. Photos of the time show it to instead have had the earlier 10-spoke optional alloys as the Avus wheels came along for with the S6.

This generation S4 was based on the C4 chassis, a model that would eventually be re-badged S6 after its mid-lifecycle facelift. It featured Audi’s 280 hp 20-valve 5-cylinder with power to the ground via quattro all-wheel drive.

Perhaps the car alone revealed something about Senna’s automotive taste, but even the license plate BSS-8855 showed some personality as it was an acronym for the family names Beco, Senna and Silva.

Regrettably, Ayrton Senna’s time with Audi came to an all-too abrupt halt. The legendary F1 driver was tragically killed in an accident at the Imola Autodrome in Italy just weeks later in May of that year.

After Ayrton’s tragic death, the Senna family retained the S4 Avant. Today, the car has logged less than 5,000 kilometers and appears to be perfectly preserved, largely in the same condition as it was the day it was delivered to Senna other than the latter Avus wheels. The Senna family and Audi Brazil have made the car available to the Brazilian press and as a result it has been featured in several magazines and videos.

Following the loss of Ayrton Senna, management of Audi Brazil shifted to his brother Leonardo Senna and their partners in order to see Audi forward in Brazil. After selling 1,474 vehicles in 1994, it took only one year for the brand to double its sales figures, delivering 3,072 cars in 1995. Attention-grabbing advertising campaigns, exhibitions and well-chosen participation at motor shows set the benchmark for the entire market.

One highly memorable event was the arrival by helicopter of the Audi TT at the 1998 motor show – before the eyes of the entire assembled mass of media.

At the beginning of December 1999 Audi AG signed an agreement with Senna Import on the foundation of a joint venture, effective from 1st January 2000. From that point in time, sales and all after-sales activities for all domestic and imported vehicles in Brazil were handled by the joint venture company, Audi Senna, in which Audi AG and Senna Import had shareholdings of 51 percent and 49 percent respectively.

After acquiring the Senna Group’s 49 percent shareholding in Senna Ltda., Audi AG then took over all sales activities for all of the marque’s products in Brazil as of March 2005 and to this end it set up Audi Brasil Distribuidora de Veiculos Ltda., a fully-owned subsidiary of Audi AG.

Another high point achieved in 1999 with the start of production of the first Brazilian Audi A3 at the Curitiba factory. For this Audi founded a subsidiary Audi Do BRASIL E CIA in 1997. The company, with its head office in Curitiba and an office in Sao Paulo, holds the Audi shares in the Curitiba works, which is jointly owned with Volkswagen do Brasil. Apart from the VW Golf and the VW Fox, the Audi A3 models destined for the South American market were also produced here from March 1999. The factory is actually located just outside the city of Curitiba, in the 200,000-strong municipality of Sao Jose dos Pinhais, and has employed a total of 4,300 people from the greater Curitiba area since 2005.