April 29 marked the launch event of the partnership between the Ayrton Senna Institute and Azul in Porto Alegre. 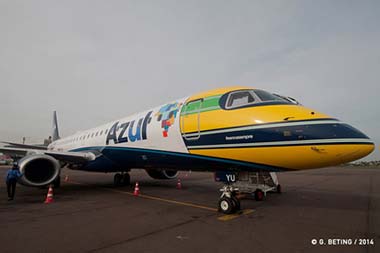 He was killed in an accident while leading the 1994 San Marino Grand Prix. He was among the most dominant and successful Formula One drivers of the modern era and is considered one of the greatest drivers in the history of the sport.

IAS – Ayrton Senna Institute is a non-profit organization set up in 1994 to promote and enhance education throughout Brazil. Every year, they change the lives of around 2 million poor, undereducated Brazilian children, by offering recurrent training by 75,000 professors all around the country.

Azul has started a partnership with IAS after donating to the institute 1 million points on the Azul FFP – Tudo Azul mileage program. Therefore, travelling all around Brazil (Azul currently serves over 100 domestic destinations) will become a reality to IAS and its business partners.

The painting of the pictured Embraer 195, registration PR-AYU (msn 19000434) coincides with the 20-year anniversary of Ayrton Senna’s tragic death in Italy. His legacy lives on with partnerships like this.