On 13 November 1982, Ayrton Senna walked for the first time in a Formula 3 car in the UK. The race at Thruxton was not worth the championship that year, because it had already ended, but it was the big test for the Brazilian driver, who knew that would make the regular season of British Formula 3 the following year.

It started in November 1982,a one-man domination of F3 that broke all previous records and not a few spirits. And, just as surely as it did for Nelson Piquet in 1978, it will pave Ayrton Senna’s path to Formula One. The determined Brazilian, already feared by many rivals even before he’d graduated from FF2000 (where he was equally dominant) to F3, made the step at last November’s Thruxton non-championship and simply blew everyone else into the weeds — and has already had an approach from McLaren International. 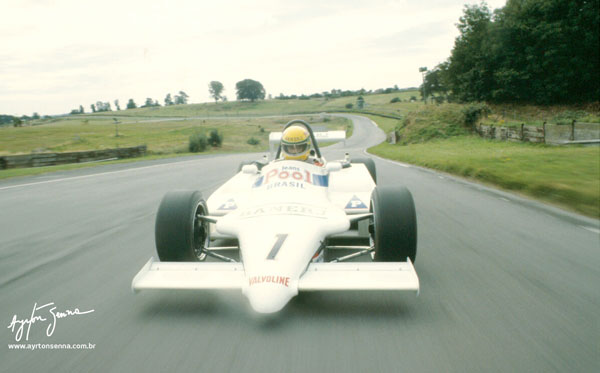 The secret? For a start he’s smooth, very quick and has the innate ability to read a race situation and drive with his head. Complementing his talent, however, is that of his entrant, Dick Bennetts of West Surrey Racing. Bennetts masterminded Jonathan Palmer’s 1981 championship success, having guided Stefan Johansson to the British title the previous season, and he and Senna (formerly da Silva) have developed a rapport that has put them in a class of their own in the domestic Marlboro British F3 series. Consider: in 1978 Piquet set a record by winning seven races on the trot before Derek Warwick upset the rhythm. In 1981 eight wins gave Palmer the title; one less saw Byrne top dog last season. Yet in 1983 Senna has won tune championship rounds in a row (10 races in all if Thruxton ’82 is counted). En route to such devastating success there have been eight pole positions and seven fastest laps, the latter each worth an extra point. Senna’s progress has been truly outstanding, the Brazilian coping with intense pressure from one or two rivals on the odd occasion and actually being led once or twice before forging ahead to adopt his now famous technique of pacing a race from his mirrors.

The bubble burst, however, when he and Bennetts ventured on to European series Yokohama rubber for Silverstone’s F3 race on June 12th. Round 10 of the Marlboro series, it also comprised a round of the European championship. Under Marlboro rules competitors must use Avon’s A6 slicks or A2 wet compound tyres only; in Europe the choice of rubber is free.

Besides winning the title, Senna got exactly what he hoped for, in 1983: invitations from Toleman, McLaren and Williams to test race cars of the world’s top motorsports category. His debut at Formula 1 was now only a matter of time.

Rivals of the Senna/Bennetts steamroller will tell you Ayrton only wins because of Dick’s list of chassis settings for every circuit on which the Ralt RT3s — still the dominant cars in the formula — race on Marlboro Avons. That, of course, overlooks several valid points, such as Senna’s abundant natural talent and West Surrey Racing’s professionalism, but it does give a clue as to why the overall package is so effective. At Silverstone on June 12th the team found itself in the same boat as its rivals for Bennetts had had little chance to test on the much stickier Yokohamas. One team had, however, and that was Eddie Jordan’s, an ambitious outfit run by the ebullient Irishman who has turned his equipe round in the past 12 months to the point where it is now one of the most respected in the formula.

When Martin Brundle was unceremoniously kicked out of his drive with Dave Price’s team last year due to pressure from a sponsor, the King’s Lynn driver transferred to Jordan and has proved the one driver capable of challenging Senna. But though Martin has enjoyed his best season ever in terms of results — he has never been out of the top three in nine races, with one third and eight seconds — he just didn’t seem to have that little bit extra to reach the chequer first. Until that day at Silverstone. On Yokohamas in only the tail end laps of practice he annexed pole position and led every race lap to take a memorable victory in perfect style, never putting a foot wrong. Which is more than can be said of Senna. The Brazilian was losing ground to the Englishman when he spun at Club, repeating the mistake with rather more terminal result a few laps later in full view of the Woodcote crowd. Up until that day on which fortunes were so publicly reversed he had made but one mistake throughout the season. 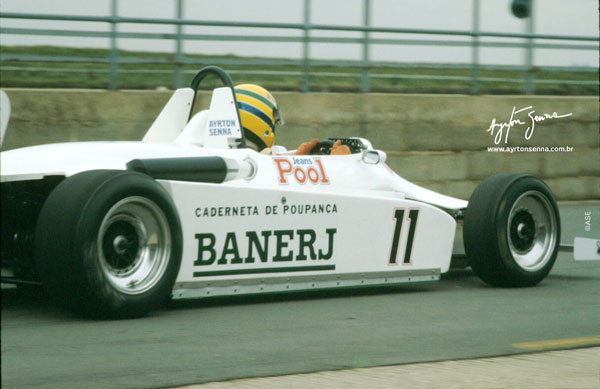 Thus, with the Marlboro season at its midpoint after 10 races, much needed fresh interest has been injected. Will Brundles breakthrough herald a new period of domination by a different driver, will Senna be challenged for victory? Or will it be business as usual for the rest of the year? Time will tell. Suffice into say, both drivers look set to reach GP racing, Senna via the rocket-like Piquet route, Brundle more by the longer path that Derek Warwick trod. Of the others, American Davy Jones, driving for Murray Taylor Racing, the team which won the title with Byrne last year, has twice taken second places — and actually led Senna for two laps at Thruxton in March. He has been the only other real potential contender for the Brundle/Senna glory. However, reigning Formula Pacific champion Allen Berg, from Canada, is now making his presence felt. After a slow start to the year he switched teams and won the Marlboro section of the June 12th race at Silverstone for Jordan. In future he can be expected to challenge even harder.

Others to shine include Swiss Mario Hytten, Scot David Leslie and Englishman Johnny Dumfries, while Englishman Calvin Fish, who spent last year challenging and occasionally beating Senna in FF2000, has proved disappointing in Price’s BP backed RT3, although he has taken third places on three occasions. Still Ron Tauranac’s Ralt RT3 is the champion car in England, and has also emerged best in Europe this season as teams switched from continental chassis over the winter. Leslie’s performances in John Robinson’s pretty Magnum 833, however, hints that the Weybridge cars might just meet a strong challenge later in the year. Leslie has been pole sitter once and recently missed a repeat by a mere 0.27s.

In Europe, Italian Emanuele Pirro, team-mate in 1982 to champion Oscar Larrauri, has climbed to the premier title chase slot thanks to two wins and a series of useful placings, but after Silverstone he is strongly challenged by Byrne, whose season has had its ups and downs with stripped gears and spins while leading.

After playing second fiddle to the Marlboro series for the past two years there are signs that the European series is beginning to exert authority and attract the top teams from all over the globe, but at present the two drivers being talked about most — Ayrton Senna and Martin Brundle — will continue their battle to the end of the season.