Formula One outgrew the Nurburgring Nordschleife long before the final race on the 14.2 mile course in 1976. Niki Lauda’s fiery accident that year was the catalyst to move F1 to the safer Hockenheim circuit, but for a long time the speeds of the cars and the marshalling had been questioned. 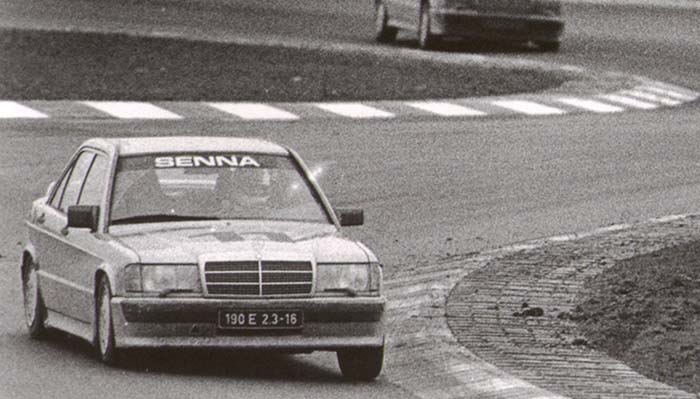 Five F1 drivers died at the circuit between 1950 and 1976 (more than any other circuit during the same period) and many more perished in other motor racing categories. With that in mind, safety was of paramount importance when the new Grand Prix circuit was built and opened in 1984. At 2.8 miles and with just 12 turns (compared to the Nordschleife’s 160) it was barely worthy of carrying the Nurburgring name, but its construction meant Formula One racing would once again return to the Eifel Mountains.

The organisers were keen to trade on the old circuit’s past and in a joint venture with Mercedes decided to host a one-off celebrity race to officially open the new circuit in May 1984. They managed to attract a star-studded field of 20 racing drivers, both from F1 and sports cars, including ten former world champions.

The big names pulled in big crowds and 100,000 people turned out to watch the 12 lap race despite miserable conditions. Championship leader Alain Prost qualified on pole ahead of Ayrton Senna and Carlos Reutemann in a competitive practice session, with most the drivers planning to take it easy in the race.By chance Prost and Senna had shared a ride from the airport to the circuit and Prost said it was the first time he got to know the man who four years later would become his nemesis at McLaren.

“Some people from Mercedes asked me if I could wait for Ayrton at the airport. We had a 10 or 15-minute time difference [in flights] and I had a car, so I was waiting to take him to the Nurburgring. That was the first time we talked together and we had a long drive, something like two or three hours, so we had time to talk.”

“He didn’t talk very much but he looked impressed because I was driving very fast on the motorway in Germany and he said: ‘You know you’re driving fast!’ It was nice and we were quite close because he didn’t know anybody, so he was always close to me during the first days.

“It was very funny because he looked very open, very nice and then we started the practice and we were fighting together for pole position. I saw him being very competitive; I took the pole, he was second and then at the start he went before the flag and I said to myself, ‘Shit, I have to take care of this guy!'”

Prost wasn’t the only one impressed by the 24-year-old Senna on track. 1964 world champion John Surtees, who like most of the old boys was just there to have some fun, recalled it vividly.

“I was very impressed,” he said. “There were a number of ex-world champions and would-be world champions who were busy cutting huge chunks of the circuit off, whistling through the inside of the kerbs and generally straight-lining many of the parts of the circuit. They were coming into the pits and asking Pirelli if they could put new tyres on so they could qualify etcetera. And there was Senna, going round the circuit, clipping the kerbs just by the right amount, using all the road and no more – and of course going faster than all of them.

“It was after that that I dropped a little note and said that if you want to get your team in order, you should take Senna – and that was to Enzo Ferrari.”

Away from the grid Senna hounded Prost and midway around the first lap barged his way past the Frenchman to take the lead. As Prost returned to the track he was clipped by Elio de Angelis and dropped down the field to finish 15th directly behind Moss.

Senna then went on to provide a consummate display of his driving skill, extrapolating every last break horsepower from the four-cylinder Cosworth-tuned engine while making inch-perfect inputs behind the wheel. In stark contrast, some of the old boys – most notably Hunt – bounced over kerbs, mud and molehills in their best efforts to redesign the brand new circuit.

In Tom Rubython’s excellent biography of Senna, John Watson remembers the day’s events: “The main memory I have of it all is of Ayrton and how he attacked the circuit and in particular the chicane, which in those days was much quicker than today. He was just launching the car over the kerbs like a stone skimming across the water. He went to a different level.”

“It was, I suppose, his calling card. That was the minimum accepted standard from him on display. He was clearly exceptionally gifted. Everyone else had turned up basically for the beer. It was a fun event, a thank you for Mercedes, a nice weekend in Germany in a hotel and nobody got stressed about it – except Ayrton, that is.”

Senna went on to take the win by two seconds from that year’s champion Lauda, with Reutemann, Rosberg, Watson and Hulme making up the top six. The Mercedes honchos were actually quite disappointed by the result as they had promised to put the winner’s car on permanent display in their factory and had hoped for one of the ex-champions to take victory. Instead a relatively unknown F3 champion had shown the big names up, although the car, which is still in Mercedes’ possession, is now worth several times more than the 1980s list price of £29,900.

Although Senna may have missed the point of the event, he had impressed F1’s old guard. Three weeks later he firmly cemented his position as a rising star when he finished a close second to Prost in a rain-shortened Monaco Grand Prix.