Mercedes-Benz employees had a brilliant and daring idea in late 1983: to organise a race with the newly introduced Mercedes-Benz 190 E 2.3-16 as a feature of the opening of the rebuilt Nürburgring. As if that was not enough, they intended to have Formula One world champions, victorious Nürburgring drivers and other top-class professionals as their drivers. The idea seemed to incorporate a large number of stumbling blocks – first and foremost, the fact that Mercedes-Benz had retired from motorsport mainly for capacity reasons. The contacts they had with Formula One circles at the time were essentially that the S-Class and the SL were particularly popular private cars used by many Grand Prix drivers off the track. 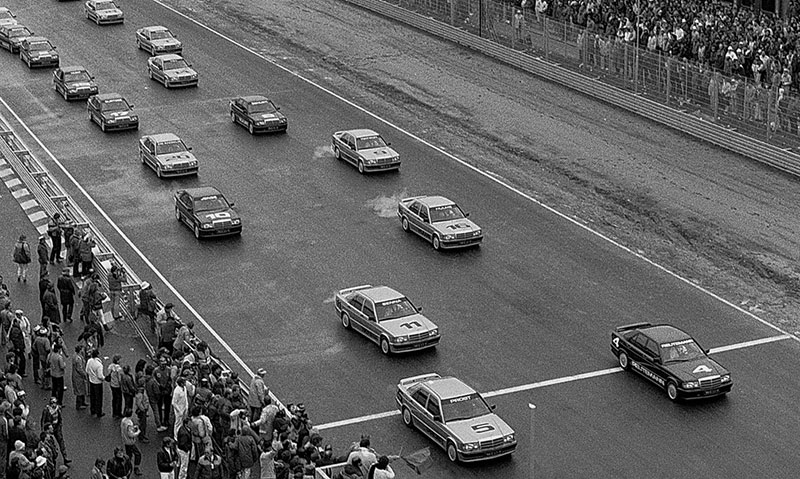 On the other hand, the model intended for the opening race – the 190 E 2.3-16 – was, indeed, very special and was crying out for a chance to prove itself on the racetrack. At the IAA in September 1983, a sports version of the newly introduced “Baby Benz” had been launched before the eyes of an astonished public. This suitability for a sporting event was not only down to the eye-catching aerodynamic aids such as the low-down front apron and striking rear spoiler, but above all was born of the top-class technology under the bonnet. The four-cylinder engine had a cylinder head with 16 valves, four per cylinder – a technology derived from racing that Mercedes-Benz, as one of the first manufacturers, had put into mass production. As a result, the 2.3-litre engine produced an impressive 136 kW (185 PS). By way of comparison, the standard 190 E produced 90 kW (122 PS) from a 2.0-litre engine. Mercedes-Benz had already demonstrated in August 1983 that this innovative concept was ready for the road: three pre-series 190 E 2.3-16 cars had completed 50,000 kilometres on the Italian high-speed oval of Nardò at an average speed of 247 km/h – which clearly qualified them for some higher challenge: a race on the new Nürburgring.

The opening ceremony and the planned “Race of Champions” was scheduled for 12 May 1984. Even before the start of series production, in the spring of that year, 20 identical vehicles were assembled for the race at lightning speed – including the necessary modifications. These included a rollover cage, emergency stop switches and six-point seat belts for increased safety. The chassis was lowered and made stiffer, the gear ratios lower and the standard exhaust system replaced by a sports version. At 103 decibels, it also gave the 190 E 2.3-16 a particularly distinctive sound. The engine and aerodynamics remained untouched – as did the colour scheme: exactly half of the vehicles were painted in smoke silver, the other half in blue-black metallic.

It was, in fact, possible to encourage almost all the Formula One world champions still alive at that time to participate in the Eifel race: Niki Lauda, Keke Rosberg, Alan Jones, James Hunt and Jody Scheckter were among them. Champions from the 1960s such as Phil Hill, Jack Brabham, John Surtees and Dennis Hulme also took part. Never again since have so many Formula One world champions taken part in a race together. Even the 72-year-old five-time champion Juan Manual Fangio came to the ring, but, for health reasons, he refrained from taking an active role. Only Nelson Piquet and Jackie Stewart were missing because their respective employers would not give them clearance to take part. Emerson Fittipaldi and Mario Andretti were busy pre-qualifying for the 500 miles of Indianapolis on that same day.

However, a number of other Formula One stars such as Carlos Reutemann, Jacques Laffite and Alain Prost had come to the Nürburgring, together with an almost unknown newcomer: Ayrton Senna, who later became a three-time world champion. The Brazilian had just made the leap into Formula One with a scratch team and saw this race as his chance to attract attention. At the qualifying stage, he managed to get his 190 E 2.3-16 into third place, beaten only by Prost and Reutemann. During the race proper, he drew on the full range of his skills and sprinted out to the front. He reeled off one lap after another there until an old master at the game, Niki Lauda, appeared in his rear-view mirror. The Austrian had had to start the race from one of the slots at the back of the grid, had fought his way up to 4th place in the first lap and was now not willing to admit defeat to a member of the younger generation.

The two constantly swapped places in a show of skills until, shortly before the end, Senna overtook in a courageous manoeuvre and won by three tenths of a second. This meant Senna had succeeded in clocking up a tremendous surprise. He had not only drawn the attention of the Formula One world, but, thanks to his driving style, had won the hearts of the 120,000 spectators. His victory at the Nürburgring was not only a particularly important milestone in his career, but also the starting pistol for the success of the Mercedes-Benz 190 E 2.3-16, which had demonstrated its potential in a very convincing manner. Only a short time later, the car was seen taking part in the German Touring Car Championship (DTM).

After his successful race, Senna had to change cars again – his winning car went straight into the Mercedes-Benz Museum. Instead, he received the published prize, a brand-new 190 E 2.3-16. It was clear from the start that all the other cars would go back to the factory. They were then restored to series production status and subsequently sold in order to satisfy the tremendous demand for the model. Only Niki Lauda’s car was left in its original racing condition and sold as it was. After a detour through Austria, it later came into the possession of a collector from Switzerland. The cars that took the first two places in this Race of Champions are the only ones of the 20 participating cars that have been proven to be in their original condition today. 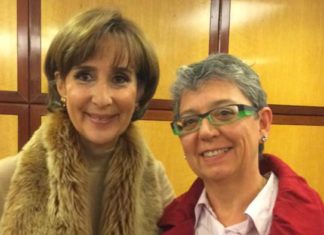 A Tribute to Life Network - 19/10/2016
0
In order to guide and warn the female audience on cardiovascular disease, the Brazilian Society of Clinical Medicine launched the “Heart Women” campaign, alongside...