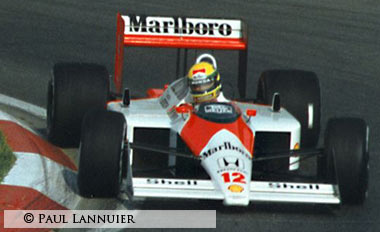 The lessons learned from Ayrton Senna’s fatal accident has hugely benefitted motorsport in the last two decades. What has happened in the wake of his death has transformed the sport.

That weekend back in 1994 was a horrendous one for world motorsport. On the Saturday, Austrian Roland Ratzenberger was killed after the front wing of his Simtek turned him into a passenger heading into the ultra-fast Villeneuve sweeper.

It was the first death in Formula 1 since Elio de Angelis in 1986, and the first in at a race weekend since Riccardo Paletti in 1982.

When Ratzenberger was followed by Senna the next day, the sport, already in a state of shock, was at a loose end. It was suddenly hit home that these men, these gladiators of the sport, were still mortal. In the eight years that had passed since de Angelis we’d all somehow forgotten that.

Had it just been Ratzenberger who’d lost his life the reaction would have been markedly different, to the detriment of everyone.

The Austrian was a 34-year-old rookie to the sport, driving for a car in which he’d do well to qualify. His death, while not excusable or acceptable, was slightly easier to understand.

We can somehow process the death of a Formula 1 also-ran better than we can that of its established star. It was overshadowed by the events of the following day, but it should never, ever be forgotten.

But he wasn’t, and his death made us all suddenly realise the sport needed to change. The reaction the world had to Senna’s death has shaped the sport ever since.

Crash tests were made more stringent, driver protection increased and deformable structures improved. Even the great Eau Rouge was not immune as circuits were progressively castrated in the name of safety.

We moan and groan at the fact that modern circuits don’t force the drivers to take the risks they once did, and don’t punish mistakes when they are made but they are safe, and that is a critical factor.

In 2007 Robert Kubica barrel rolled his BMW Sauber in Canada. The car disintegrated around him, shedding wheels and wings while keeping the safety cell intact. When it came to a rest, his feet dangled worryingly out the end of the car, yet he escaped with minor injuries in an accident that would have killed him 10 years earlier.

The same can be said for Anthony Davidson, who crashed heavily at Le Mans. Lapping a slower car in his prototype Toyota, his car flew some 200 metres through the air at the end of the Mulsanne straight.

He came to rest just metres short of a tyre barrier in to which he slid heavily. Soon after the former Formula 1 driver tweeted from hospital that he had a broken back but was otherwise okay. A broken back is not always as terminal as it sounds.

Piergiueseppi Perazzini, the driver of the Ferrari which tagged Davidson, collided equally heavily before being upended and coming to rest on its back. The Italian sprung from the car, stepped over the fence and sat on the grass bank uninjured.

It is easy to imagine that accident having been far worse, and there are countless other examples from categories across the world where increased focus has saved lives.

I can vouch for those in motorsport who hold their breath every time there is a heavy accident. Hang around the sport long enough and you will lose friends; the sport is dangerous, but at least now it is very much the exception rather than the rule.

To this day Senna remains the last driver to be killed in a Formula 1 car. It’s been 18 years since the Brazilian great lost his life, the longest period without a fatality in the sports history.

Senna’s demise can be credited as a significant factor in the drive to improve safety in modern motorsport. It’s a legacy the Brazilian has left behind him, which has enhanced the sport to a degree it would never have reached had he just hung up his helmet. Senna paid the ultimate price and as a result so many others haven’t.

It’s a terrible way to think about the demise of one of the sports brightest stars, but not one that should be ignored or forgotten.