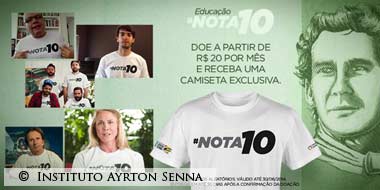 In 2014, the year we celebrate 20 years of Ayrton Senna’s legacy, many fans are already familiar with the meaningful social work started by the driver with the Institute that bears his name and that currently trains 75 thousand teachers, directly benefiting around 2 million students in more than 1,300 cities in several of the country’s regions.

Based on that insight, a new campaign is being launched on Wednesday, April 30th. It’s “Educação Nota 10”, winner of the Google Creative Sandbox Brief’s second edition. The national competition, which fostered the creation of YouTube campaigns for NGO’s, was won by Ricardo Chester and Augusto Moya, from Africa ad agency.

The campaign’s goal is to increase the number of Ayrton Senna Institute monthly donors through a movement urging the Brazilian Central Bank to print a R$10 bill with the three-time Formula One champion’s effigy. The public will be made aware via YouTube video spots, posts on the NGO’s social network pages and a hotsite: www.SennaNota10.com.br. The campaign features videos from personalities who support the idea and the Ayrton Senna Institute’s cause.

To implement the project, Google has supported the creation and broadcasting of the campaign on its channels. Besides that, Ricardo Chester and Augusto Moya were awarded a digital branding course at the BrandLab, located at YouTube’s global headquarters, in San Bruno, California.

“We’re very pleased with the participant’s excitement and we’re sure this campaign will highlight technology’s potential to take creativity to another dimension”, says Julio Zaguini, Google’s Director of Agency Relations.

The Creative Sandbox Brief 2.0 contest took place in 2013 and had a jury made up of 12 creatives, among them representatives from the Miami Ad School and directors, partners and VPs of the biggest ad agencies in the marketplace, besides a popular vote, to determine the winner.