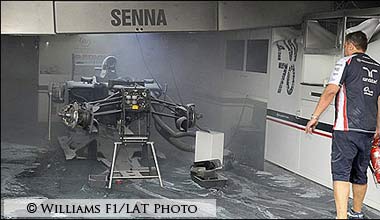 The F1 car photographed amid the charred remains of Williams’ burnt-out garage in Barcelona will be back in action this weekend at Monaco.

We reported last week that an initial inspection of Bruno Senna’s Renault-powered FW34, which was sitting in the pits when the fire broke out during the team’s celebrations for Pastor Maldonado’s victory last Sunday, showed it had emerged with minimal damage.

A spokesman has now confirmed that Senna will race the very same chassis on the streets of Monaco this week.

“But the impact has been mitigated by what can only be described as a herculean effort by the factory and our suppliers to restock both the damaged equipment and car parts,” he said.

Mark Gillan also said rival teams made “generous offers” of help. Maldonado’s chassis was safely in parc ferme at the time of the fire. Recently, the Brazilian has been giving up his seat to the team’s rising young reserve driver Valtteri Bottas on Friday mornings. But Bruno Senna will be at the wheel of his Williams throughout the Monaco grand prix weekend. The programme of the Finnish driver for 2012 involves practicing at every grand prix circuit “except for the street races”. Therefore, Valtteri Bottas is expected to also sit out Canada, Valencia and Singapore. 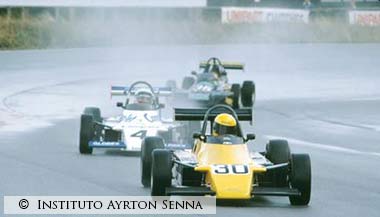 Senna: Battle of the heart and mind 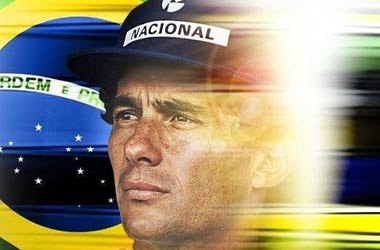