On what would have been his 57th birthday, we look back at 10 of Formula 1 legend’s Ayrton Senna’s most memorable moments in a career filled with stunning highs. 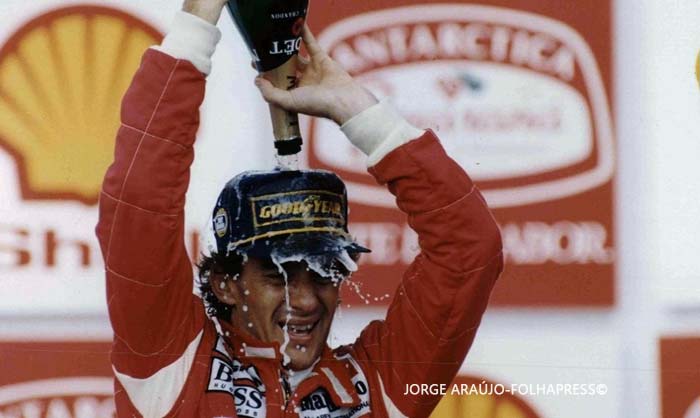 Ayrton Senna had caught the attention of the motorsport world through his antics in Formula 3 and stepped up to Formula 1 at the start of 1984 with Toleman, but made his first big splash in a different discipline: saloon car racing. Senna was invited to a special all-star race at the Nürburgring in May 1984 to celebrate the opening of the new grand prix circuit, the old track having been condemned to history due to its danger. Senna went up against the likes of Alain Prost, Niki Lauda, Jack Brabham, Keke Rosberg and James Hunt, having been drafted in as a replacement for Emerson Fittipaldi, who was tied up with qualifying for the Indy 500. All driving identical Mercedes 190E 2.3 Group A touring cars, Senna took the lead on the first lap from pole-sitter Prost and dominated, beating a field including 10 world champions. His special talent was there for all to see.

Mere weeks after his showing at the Nürburgring, Senna produced another astounding display in a rain-affected Monaco Grand Prix. On the track Senna would come to make his own in the years that followed, he swept through the field on a drenched circuit, rising from 13th on the grid to run second in the space of 18 laps. As conditions worsened, Senna eked every last tenth out of his trusty Toleman to cut the gap to Prost at the front dramatically, the Frenchman protesting that the race should be red flagged. Officials ultimately called the race after 31 laps, declaring Prost the winner by seven seconds from Senna. Senna had been happy to continue, and with a couple more laps would most probably have claimed his maiden F1 win that day…

After securing a move up to Lotus for 1985, Senna wasted little time in taking his first pole position and victory in F1. In just his second race for the team, Senna bagged pole for the Portuguese Grand Prix at Estoril after leading both qualifying sessions, finishing four-tenths of a second ahead of Prost. A wet race did little to perturb Senna, who reigned supreme through the spray to chalk up his first grand prix victory, leading lights to flag and putting a lap on all but one driver in the field. It was a devastatingly dominant display – but merely a sign of things to come…

Monaco 1988 may be remembered by some as the ‘race that got away’ from Ayrton Senna when he crashed out with a healthy lead, yet it is best known for the greatest qualifying lap in the history of Formula 1. Ordinarily such a claim could be disregarded as hyperbole, but in this case, it is undisputed. Senna produced a magic lap in qualifying to finish 1.4 seconds claim of fierce McLaren rival Alain Prost – a lifetime on any track, but especially in Monaco. Senna later described himself having an out of body experience when completing the lap, only adding to the mystique surrounding it. Although he would crash out of the race, the lap itself was enough to make the Monaco ’88 go down in history as belonging to Ayrton Senna.

Japan 1988: Fightback For The Title

Suzuka would be the battleground for a number of Senna’s showdowns with bitter rival Alain Prost through the years, but the first was a somewhat tame affair by comparison. Senna needed victory in Japan to wrap up the championship with one race to spare, and put himself in a strong position by taking pole on Saturday. However, his hopes looked dashed when he stalled on the line, dropping down the order. What followed was one of Senna’s most crucial fightbacks, charging through the field to re-pass Prost for the lead with 24 laps to go. Senna streamed away to win the race by 13 seconds and clinch his maiden F1 world title in the process.

The height of the Senna/Prost tensions at McLaren came in 1989 at the Japanese Grand Prix. Senna took pole at Suzuka by 1.7 seconds, but lost the lead in the early part of the race to Prost due to the Frenchman’s superior race setup. A couple of tweaks through the pit stops made Senna more comfortable and allowed him to catch Prost, getting a run on his rival through 130R on the run down to the chicane. Senna dived down the inside, only for Prost to move his car across. The two clashed and spun off, with Prost thinking the race – and championship – was over. Senna got a push from the marshals and was able to rejoin the race, completing a lap without a nosecone before pitting for repairs. After getting serviced, Senna charged to catch new leader Alessandro Nannini, going four seconds per lap faster before making a pass that would keep his title hopes alive. However, the stewards deemed after the race that Senna had not rejoined the track correctly following the clash and disqualified him. The title was Prost’s. As tense as the fight was, it must surely go down as one of Senna’s most memorable F1 moments

Senna’s victory at Interlagos in 1991 was arguably the most poignant of his F1 career. With two world titles to his name, a home win still eluded Senna, but he looked in control through the 1991 event after pulling out a lead over Williams’ Nigel Mansell. However, the gap fell dramatically when Senna suffered a gearbox issue that lost him fourth gear. Mansell began to charge, only for his gearbox to go bust, offering Senna some respite. The Brazilian’s dramas continued when he was left to complete the race in sixth gear, with Riccardo Patrese now in pursuit. Senna was able to hold on and win the race by 2.9 seconds, suffering from exhaustion after crossing the line due to the sheer effort of keeping his car going. But at last, Senna had done it: he had won on home soil in front of his faithful fans. He would repeat the feat once more in 1993.

Monaco 1992 is a classic example of why F1 needn’t worry about making overtaking easy; following is the hard part! The Williams FW14B was the class of the field in ’92, making wins hard to come by for Senna and McLaren. Nigel Mansell took pole for Williams in Monaco and dominated proceedings, with Senna – 30 seconds behind – looking ready to settle for second place. Mansell’s win hopes were blighted when he suffered a loose wheel nut, forcing him to pit. Williams fitted a fresh set of tyres and sent Mansell back on his way in second place, carving into Senna’s lead at over two seconds per lap. Senna looked like a sitting duck, but he was somehow able to make his McLaren car as wide as possible, shutting Mansell off at every opportunity. The Brazilian held on for a memorable victory, one of just three he would take in a tough 1992 campaign.

Donington 1993: A Masterclass In The Rain

The final wet-weather display in our countdown comes at Donington in 1993, the only time F1 visited the Leicestershire track. Once again, Senna found himself hamstrung by a difficult McLaren, with Williams being the team to beat. Alain Prost and Damon Hill locked out the front row, but the start saw Senna produce one of the single finest laps in F1 history. Dropping to fifth off the line, he danced through the spray and picked off Karl Wendlinger, Michael Schumacher, Hill and finally Prost all in the space of a lap. Senna then disappeared into the distance, eventually winning the race by over 80 seconds, lapping everyone except Damon Hill. One of the defining displays of not just Senna’s career, but also F1 in the 1990s.

Senna finished his time at McLaren with a flourish, winning the final two races of the 1993 season. His last F1 victory came at Adelaide in the final round of the year, with the championship already settled in Alain Prost’s favour. Prost would be making his last F1 start that day, but could not get a swansong victory as Senna dominated, allowing his rival a stint of just five laps out front after making an earlier pit stop. Senna came home with a nine-second buffer, recording a goodbye win for McLaren, the 41st of his glittering F1 career, and – unbeknownst at the time – his last. Senna and Prost chatted after the race as they took to the podium together. Senna even dragged Prost onto the top step when he collected his trophy, the two embracing. At last, their icy rivalry was over.