Held on a rainy day in the UK, this event in the F1 calendar was notable for many reasons – one of which was that Nintendo’s rival Sega went all-out to sponsor the entire event, and Sega logos were visible all over the track (as well as on the championship-winning Williams FW15C car, as Sega was one of the marque’s main sponsors). 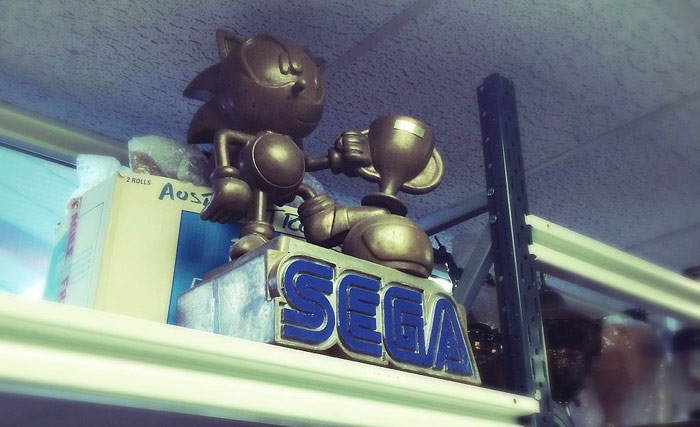 Speaking to Eurogamer in 2016, Simon Morris – Sega UK’s marketing director at the time – explained the lengths the company went to in order to capture the hearts and minds of viewers at home:

“We got them to draw Sonic’s feet on the side of the Williams FW15C so it would look like he was driving and we were even trying to sponsor the underside of Damon Hill’s car in case he ever turned it over. I was recently at McLaren and some of the guys there reminded me that we used to put a Pirate TV insignia on the car for every race Damon won, so they in turn started putting a squashed hedgehog on the front of Senna’s car when he won! Can you imagine that happening in the sport today, with the incredible sharing power of the internet and social media? It would go wild! Like so much of our promotional activity at the time, it was one of those things that simply came together.”

As you can see, the stage was set for a Sega promotional blow-out, as Williams drivers Alain Prost and Damon Hill were favourites to scoop the win (Prost would ultimately become the season champion, before retiring from the sport).

However, things didn’t exactly go according to plan, as the legendary Ayrton Senna – in his comparatively underpowered MP4/8 (McLaren had switched from championship-winning Honda engines to Ford for the 1993 season) – overtook four cars in the opening lap to take the lead; a lap which is considered to be one of the best ever driven in F1. As a result, it was Senna and not Prost or Hill who became the recipient of the legendary Sonic trophy – a publicity stunt which, despite the lack of a Williams driver, still worked wonders for the Japanese games firm. The Sonic trophy was of course just a piece of clever marketing, and Senna was handed the real race trophy shortly afterwards.

Nevertheless, it is this image of the famous Brazilian driver holding aloft a golden Sonic which became etched in the minds of racing fans (and gamers) the world over. After the race, it was assumed that this trophy had been lost (understandably, the team probably didn’t want to display such a garish marketing stunt in its trophy room) but McLaren’s Twitter account has just dropped a bombshell:

So there you have it. The trophy – once assumed lost forever in the mists of time – has been found in a dusty storeroom at McLaren. And before you say, the left arm does indeed move, hence the different pose in each image.

Goodness knowns how much this thing is worth; the video game connection alone would give it incredible value, but the fact that the late, great Ayrton Senna won it during one of his most famous victories would push the cost into eye-watering territory.