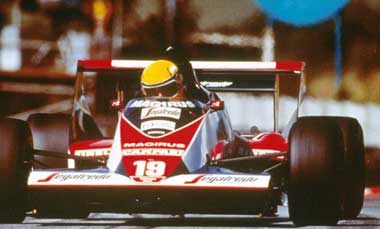 The South African circuit of Kyalami played host to the second round of the 1984 Formula 1 season. It was a race that promised drama. Qualifying had Nelson Piquet on pole, determined to put the disastrous retirement at his home race behind him.

Keke Rosberg and Nigel Mansell were placed at second and third. Alain Prost and Niki Lauda, racing the McLaren TAG had taken 5th and 8th. Ayrton Senna, readying for his second F1 race, only managed a 13th on the grid. But that didn’t matter. Senna wasn’t worried. He knew he could go faster.

Race Day dawned with a scary crash during morning warm-up that left the Italian Piercarlo Ghinzani with moderate burns, and a car split in half. The race began with Prost having to switch to a spare car and starting from the pitlane. Mansell and Patrick Tambay fell back soon enough, despite a great start. Meanwhile Niki Lauda and Piquet battled for position. But the winners were clear that hot, sweltering Sunday. The Austrian master took the win and podium while his teammate Prost took second and Derek Warwick in the Renault took third. Mansell, Piquet, Rosberg – all retired.

But the surprise that day was Senna, the young Brazilian in the not-so-fast Toleman. He ended up 6th on the grid, a great achievement for a driver on his second outing.

While all eyes were focused on the great battle up front, there was another that was being fought at the back. Senna was driving the white and blue TG184. The car lost a part of its nose cone early in the race. But pitting meant losing precious time. It was not an option. Ayrton carried on racing, driving as best as he could, right till the very end. His determination paid off. Senna took 6th place, and scored his first Grand Prix point. But this came at a price thanks to the immense heat and altitude. The Brazilian was exhausted, to the point of collapse.

This wouldn’t be the last time Ayrton pushed himself. There would be several such occasions when he would race till the very end – surprising not just himself but his team and his fans. It was this determination that made him a rockstar, a true legend.