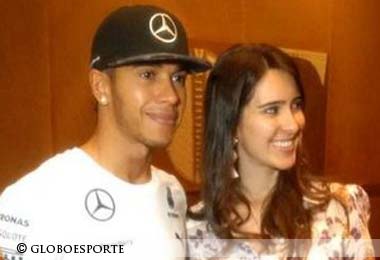 British driver win a gift from the hands of Paula Senna, Bruno Senna’s sister, an edition of the book released last week on the career of the Brazilian idol.

Lewis Hamilton enjoyed a special moment before entering the track for the Brazilian Grand Prix at  Interlagos. Declared fan of Ayrton Senna, the leader of the season in the Formula 1 World championship met Paula Senna, nephew of three-time champion and also the sister of Bruno Senna. Lewis Hamilton won a copy of the book “Senna, the History of the fourth – third championship” about the career of the great champion.

While waiting for the meeting, Paula pointed out similarities between the Ayrton and Lewis:

Lewis is very fast, always seeking the minimum space to do overtaking, it is very reminiscent of Ayrton.

Hamilton, by contrast, was full of praise at the meeting. Moved, was presented with the book that tells the story of Senna in three world titles and controversial season in 1989. The work, written in Portuguese and English drew the attention of the pilot. Hamilton joked:

– The title is sensational (book). It was a very controversial decision, Ayrton deserved that title. He is my idol and it is a great pleasure for me to be here in your country, run your favorite track and find Paula.