To celebrate the 20-year legacy of Ayrton Senna, British artist Ian Berry in collaboration with the Instituto Ayrton Senna, has created a unique portrait, made entirely of jeans. The portrait was unveiled by the family yesterday at the Institute’s headquarters, in the presence of the artist. The presentation of the picture will occur a few days before the Brazil GP at Interlagos race track in Sao Paulo, the hometown of Ayrton. 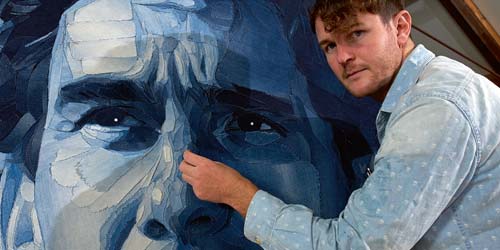 The portrait was done to support the work of the Institute Ayrton Senna. The income generated from the sale of the piece will revert to the Institute, an organization that annually receives 2 million children and youth in all regions of Brazil, with a quality public education.

As shown in the unreleased BBC documentary about the young artist, Ian Berry (Huddersfield, 1984) does not use anything besides jeans to create incredibly detailed portraits and cityscapes. Over several weeks, he cuts, stitching and glue, using only various shades of tissue to generate contrast and shadows. Berry and the Senna family chosen together, the picture that very characteristic of Ayrton,and was used as the basis for the portrait.

While working in his studio in Amsterdam, Berry found inspiration in her childhood: “I was playing a racing game and everyone wanted to be Senna. I just was ten in 1994, but I remember. Years later, I understood that he was an icon who transcended the sport of motor racing and he was one of the greatest personalities of the 20th century, whose legacy lives on in the 21st century. Commenting on the unique details of his portrait of Senna, says Berry “I think he’s gorgeous. They take care of his legacy fondly, and realized his dream of helping children by founding Brazilian Ayrton Senna Institute after his death in 1994. ”

Ayrton legacy will be remembered forever as the young hero, loving, handsome and talented it was. And his memory will be preserved in jeans in a unique work of art.