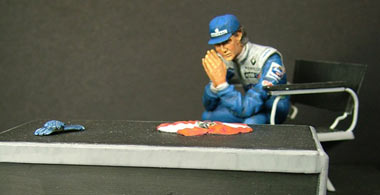 The photo above is just one shot of the finished piece which I entitled “For Roland”.

“Senna the Movie” has generated an unprecedented amount of discussion and interest into Ayrton Sennas life and indeed, his untimely and tragic death.  And while the movie has unleashed many new insights into different aspects of his racing career, it has also raised many more questions.

Ever since Senna burst onto the F1 scene back in the early ’80?s, I have always been a fan and I often found myself watching somewhat boring races just to see him perform.  I always felt once he was on track his mere presence held promise of something “different” happening, even when the race had established a definite pattern or more often than not, when he was struggling to wrestle with an under-performing car.   In January 1994 myself and a work colleague finally realized our long standing ambition of booking ourselves a trip to see the Monaco Grand Prix (due to be held on the 15th May that year) and sit in the grandstand at the swimming pool complex where the cars flash by at over 200KPH, but more importantly to see Ayrton Senna for the first time (other than on TV) driving his Willimas FW16 in anger.

Sadly it was not to be.  As we all now know, Ayrton Senna sadly perished in a dreadful high speed accident at Tamburello corner during the San Marino Grand Prix held at the Imola circuit in Italy on the 1st May 1994.  The entire week-end of that race was littered with other accidents.  In Friday practice Rubens Barrichello was injured in a high speed crash and the following day  the Austrian driver Roland Ratzenberger was tragically killed during qualifying.   At the start of the race on Sunday there was an incident in the pitlane where a pit crew member was injured and indeed there was an accident at the start-line resulting in spectators being hit and injured by flying debris.

It was an awful build up to a race and I have to say I felt uneasy as it eventually got underway.  I remember watching the race live and for some reason feeling concerned for Senna – call it a premonition or whatever, but with so many incidents having happened, I remember thinking: “Who’s going to crash next”?   And the images which stay in my mind from that awful time is the terrible impact of Senna’s Williams against the concrete wall (it was like an explosion) – and then the dreadful montionless sight of his yellow helmeted head slumped sideways in the cockpit.

That normal reassuring indicator that “all is well” (evidenced by the driver attempting to extricate himself from his harness) never came and the longer the sight of his “stillness” in the stricken Williams was broadcast from the helicopter shot from above, one had a sense that this was not just “another accident” – this was that awful “pit of the stomach stuff” – unthinkable, unbelieveable.    Once Senna’s death was announced, it was like the whole “formula one” world had stopped – it was like what is the point – how does one justify being a fan of this sport??

And with the shadow of Sennas demise still hanging like a dark cloud over the F1 world we headed off on this in persuit of this “dream” trip to spectate at the Monaco Grand Prix, it was a very strange (even pointless) feeling, and had we been able to get a refund for our Grandstand and Flight tickets, we would gladly have stayed at home.  In any event, we did go to Monaco but it was just a case of “going through the motions” – the atmosphere was totally flat and hollow and there was a sense that nobody had any real appetite for serious racing.  One of the most poignant aspects from that terrible race in Imola is the tremendous concern Senna displayed for the safety and well-being of his fellow competitors.

Following Barrichellos accident and the Roland Ratzenbergers fatal incident, Senna made it his business to visit the crash sites immediately with the rescuers and he also spent lots of time talking through each incident with Prof’ Sid Watkins (the F1 medical director) in an effort to understand what happened on each occasion.  In “Senna the Movie” seeing Senna in the Williams pits that week-end looking up at the monitor (as both incidents unfolded) and becoming visibly upset himself was very unsettling.   The sight of Senna being upset by these events seemed to shake everyone around him – the Williams team knowing how he felt were fully expecting him not to race the next day and in fact, it’s reported that Prof’ Sid Watkins advised him to take a break and go home!

The other aspect of “Senna the man” is how deeply religious and spiritual he was.  He talked openly about how his religious belief and “his God” was so important to him and this aspect came across very strongly in the movie.  Of the many details and “stories” which have emerged in the aftermath of his passing perhaps the most touching is the fact that Senna was reputedly carrying an Austrian flag (either in the car or in his overalls) to wave as a tribute to Roland Ratzenberger after the race.  Given what had happened over that week-end one can only imagine what must have been going through Sennas mind in right up to the point when he put on his helmet and was strapped into the FW16 waiting for the “off”.

The story about the “flag for Roland” only seems to have emerged after Senna was removed from the car, and as I haven’t seen any references as to how he might have prepared this tribute, we are left to imagine how he might have gone about this in the privacy of his motor-home or in a secluded spot within the Williams garage just before the race.

In my own humble attempt to characterise this very touching moment in miniature I’ve modified a 1/20 scale seated resin figure from GF-models – using a modified Modellers head and plenty of Milliput.  I envisaged him seated in a reflective mood, with hands joined in a somewhat “prayerful pose”.  In front of him are laid out all the items he will bring to his car: his helmet, gloves and the small Austrian flag as a tribute to Roland.  With the exceptions of the head/neck, I have so far established all the main modifications to the figure using metal pins and milliput – mainly to sculpt new arms and instead of a bare head, I have him wearing his blue “Nacional” hat.  So I’ll refine the detail on the figure further and finish off the furniture (table / chair, helmet etc) and then get started on the painting – so more on this piece later.