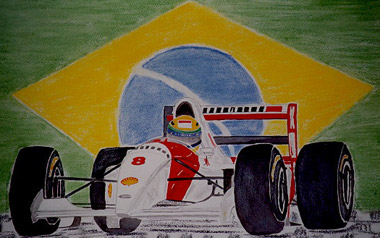 Ayrton Senna was three times a formula one world champion, holder of a record 65 pole positions and a near living legend of motor racing.

Had he survived the accident that claimed his life back in 1994, he probably would have gone on to win more races, more championships and claim many more pole positions, thus insuring himself an even bigger chunk in racing history than he already had.

When he moved to the all conquering Williams team in 1994 it looked as if he was going to start a reign of dominance in Grand Prix racing the like of which the sport had never seen before. Sadly though, it was not to be.

Senna’s 1994 season had not got off to a good start. A spin at his home race in Brazil saw him retire and Michael Schumacher go on to win. A start line incident in Japan saw another race with no points for Senna and another Schumacher win. Going into round three at Imola, Ayrton was under pressure. He simply had to win the race to get his championship back on track. Schumacher had a 20 point lead that while not impossible to overcome, certainly added a sense of urgency to the proceedings for Senna and the Williams team.

The 1994 Williams FW16 car was not as good straight out of the box as the Benetton of Schumacher. The sports governing body (the FIA) had banned the use of traction control, active suspension and other devices that made the cars easier to drive. Both Senna and his team mate Damon Hill were complaining that the car was nervous and difficult to drive. However, Senna still managed to put the Williams on the pole for Sundays race. But Ayrton was uneasy. In Fridays qualifying his fellow countryman, Rubens Barichello, had been injured in a bad accident, and worse was to come. Austrian Roland Ratzenberger had a massive off while on a committed qualifying lap in Saturday’s session. The crash was relayed live over the television to the watching world. As his car came to a rest the Austrians head was slumped to one side in the cockpit, not moving at all. Medical crews were on the scene very quickly but it soon became obvious that Ratzenberger was in big trouble.

Senna like most people was visibly distressed by the accident. He defied the rules and went to the scene of the crash in a course car after Ratzenberger had been taken away. He wanted to speak to the marshals and inspect the scene for himself, after doing so he immediately withdrew from the remainder of the qualifying session.

Roland Ratzenberger had gone off at nearly 200mph and slammed into a concrete wall. He stood little chance of survival after such a huge impact and despite the best efforts of the track doctors Roland Ratzenberger died. It was the first fatality at a Grand Prix for some 12 years.

That night Senna was preoccupied. The weekend had so far claimed the life of one driver and injured another. Earlier in the year Senna had spoken about the banning of the electronic driving aids and said that while he agreed that more emphasis should go on the drivers skill “It was a great error to remove the electronics”. He went on to say “It’s going to be a season with lots of accidents and I’ll risk saying we’ll be lucky if something really serious doesn’t happen”. In retrospect it was a chilling prediction.

Senna was worried about the removal of the electronic aids and the results it was having in his sport, but now he was also worried in himself. Usually he would be 100% concentrated on the race through a Grand Prix weekend. His intense focus at Grand Prix meetings sometimes made him seem cold and almost arrogant. But this weekend his focus had been wrecked by the two serious incidents. After Roland’s death Ayrton had called a meeting of all the drivers to discuss driver safety. That meeting was scheduled to take place before the next race in Monaco. He was upset too that Italian race officials were going to go ahead with the race. Ayrton believed that Roland had been killed instantly and thus under Italian law the track should have been closed immediately.

Race day, and Ayrton was now under enormous stress. He not only had the terrible incidents on his mind but also the fact that some people were already saying he was going to lose the championship to the young charging Schumacher. Imola was the race in which he needed to answer his critics and take command once more.

At the start all eyes were on Senna and Schumacher. As expected they both charged away from the start line, Senna just out in front. Behind Schumacher’s team mate, JJ Letho, had stalled on the grid and was waving his arms frantically to warn other the drivers. They nearly all missed his stationary car but Pedro Lamy in the Lotus, now traveling at some speed, was unsighted in the starting Melee. By the time he saw Letho’s stalled Benetton he was powerless to avoid hitting it. The impact was hard sending debris flying into the grandstand. Quickly the atmosphere turned once more to horror as nine spectators and a policeman were injured by flying debris.

The scene was one of chaos as the cars completed the first lap of the race coming onto the pit straight at full speed. The stricken Benetton and lotus were still on the track, but the race was surprisingly not being stopped by officials. Instead the safety car was deployed onto the track. All the cars had to line up behind it and follow it around while the track was cleared. All this time vital heat and pressure, that has to be in the Grand Prix cars tyres, was decreasing. Senna often drew up along side the safety car and waved at the driver to go faster, but the brakes on the safety car (a standard Opel vectra) were by now completely worn down after the Opel had done two flat out laps ahead of the F1 field. The safety car driver knew of Senna’s annoyance at his apparent lack of speed, but he could go no faster for the risk of going off track himself!

On lap 6 the safety car pulled in and the race was on at full speed once more. Senna streaked away with Schumacher in pursuit. Going into the flat out left hand Tamburello curve Schumacher noticed Senna’s car twitch and spark as it ‘bottomed out’. Senna had kept control of the straining Williams though, but on lap seven at the same point his car did the same and this time it went off.

The car went straight on at 192mph over the run off area and into the concrete wall. The angle of the impact was nearly head on and Senna’s car bounced back onto the track with the ferocity of the impact sending debris flying into the path of the oncoming field.

Marshals ran to help Senna but stopped just short of the car when they saw blood on the inside of Senna visor. His head was motionless in the cockpit. Emergency services were on the scene within a minute. The race was stopped.

For what seemed like an age the medical teams worked on Senna at the track side. The severity of the accident as if not already apparent was made more so by the landing of the medical helicopter on the track . Television pictures relayed images of the doctors working on Senna. The BBC however did not show these images. Instead Murray Walker and Jonathan Palmer described the scenes in voices filled with apprehension. Other commentators tried to speculate as to what had happened to cause the accident while others could manage no words at all. Alain Prost who was commentating for French Television could hardly disguise the fact that he was crying as he described the scene. Earlier in the day Senna and he had exchanged warm greetings, notable because the two had previously been bitter rivals.

Eventually Senna was moved to the helicopter and flown to Bolongne hospital. Back at the track the race was restarted and won by Michael Schumacher. The champaign was not sprayed this time though, and as the drivers were told of Senna serious condition their joy turned to tears on the podium.

At the Imola circuit the car had been impounded for investigation by Italian authorities. However from the shattered cockpit they found a furled flag. Senna was fiercely patriotic and it was not unusual to see him holding a Brazilian flag as he completed the run down lap after winning a race. This flag wasn’t a Brazilian one though. It was instead an Austrian flag. Senna had planned to hold that flag on his run down lap if he won the race. Clearly he wanted to pay tribute to Roland Ratzenberger by dedicating that win to the Austrian driver.

The President of Brazil, Itmar Franco, was quick to declare three days of national mourning for Ayrton. His body was flown back to Brazil escorted by fighter jets from the Brazilian air force. At the airport a military guard of honour placed his coffin on a fire engine for the journey to the legislative assembly in Sao Paulo.

Around a million people lined the route from the airport as the cortege made it’s way through the outskirts of Sao Paulo escorted by police motorcycles. Under a shower of petals Ayrton’s coffin was carried into the legislative assembly where it was guarded round the clock by soldiers in ceremonial dress. A quarter of a million people filed past the coffin to pay their last respects to this national hero, many more mourned openly outside holding pictures of Ayrton. The outpouring of grief felt by Brazilians was very real. Their unofficial ambassador to the world was dead and they had no one to replace him.

In the aftermath of the accident the debate about safety in Grand Prix racing had begun. Theories into what had gone wrong were leveled by many. Italian authorities closed the Imola circuit and informed the circuit owners that they were going to be investigated for culpable homicide along with Frank Williams, Patrick Head, Adrian Newey and the clerk of the course Roland Bruncherider.

The 1994 season went on as Formula one has always gone on after such a tragedy. But the loss of Ayrton Senna has left a gaping hole in the sport that will be hard to fill, if indeed that were even possible.