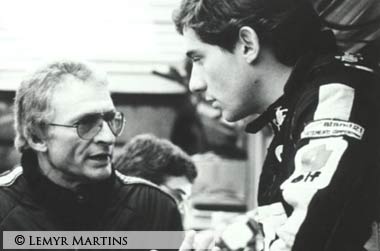 A week after the Italian GP came the rescheduled Belgian GP, which had been canceled in the Spring because the track broke up in practice. There were several changes down through the field with RAM reducing to one car for Philippe Alliot while Christian Danner came in to replace the injured Jonathan Palmer at Zakspeed. Tyrrell continued to run only one car following the death of Stefan Bellof. early in the first session Niki Lauda crashed heavily when his throttle stuck open and he strained his wrist. He withdrew for the rest of the weekend.

Practice had been dry but on race day it was raining but it stopped before the race although the track remained damp. Everyone started on wet tires and Senna got away best and took the lead with Piquet accelerating to second before the first corner. Exiting La Source, however, Piquet spun. Prost narrowly missed him and everyone managed to get through unscathed. This gave Senna a huge lead by the end of the first lap but Prost quickly closed the gap. Mansell was third from Alboreto, Johansson, Boutsen, Rosberg, de Angelis and Berger. 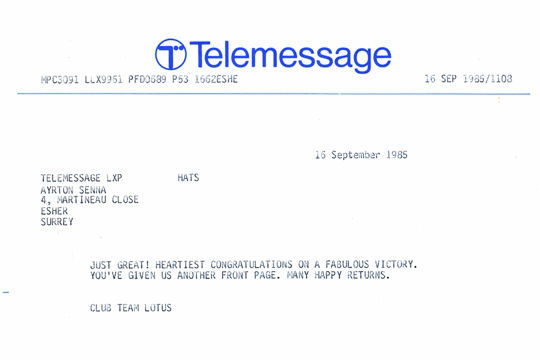 Johansson soon moved ahead of Alboreto who dropped back four places, unhappy with the way his car was handling. He soon retired with a clutch failure. Rosberg also dropped from the action by stopping for dry tires. Soon everyone was stopping although Johansson’s race ended as he accelerated back onto the race track and his engine broke. De Angelis was briefly in the lead but then he pitted and Senna was in front again with Mansell chasing. On lap 10 Mansell spun at La Source but managed to keep going in second. Rosberg was third with Prost fourth, Boutsen fifth and Patrick Tambay (Renault) sixth.

Then it began to rain again and Senna pulled away while Mansell was slowed down as he had to avoid a spinning Marc Surer and so came under pressure from Rosberg. It did not last long, however, as Rosberg had to pit to have a brake problem fixed. He rejoined behind Prost. Fifth place had been held by Boutsen for much of the race but he faded at the end and Piquet took the two points while Derek Warwick (Renault) came through to pick up a point for sixth.