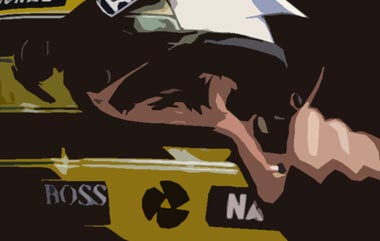 THE squeal of burning tyre rubber pierced the cacophony of roaring engines as, in a moment of brilliance, Terry Fullerton squeezed past Ayrton Senna.

It was the 1980 Champions Cup final in the high-octane world of professional go-karting. Briton Terry was very much at the top of his game, with his young protégé firmly in his slipstream.After the race, in Italy, Senna fumed: “I think I am the moral winner. Fullerton played dirty. I let him go even though the way he overtook me was against the rules.”

Terry, now 58, remembers it differently, of course. “I seem to recall it was quite a good pass to snatch victory,” he said. For all Senna’s grumbling, Terry’s dominance over him when he was the precocious new boy in karting clearly had a big impact.

The Sun tracked Terry down to his home in Norwich, where he lives a quiet life with wife Nilda and six-year-old daughter Jenny. Terry admitted he had learnt of Senna’s praise shortly before the maverick’s untimely death on the Imola race track but had completely forgotten about it. So he was delighted when he watched the interview clip in the critically-acclaimed film. Terry said: “I’m really glad he said it. I shall hold on to that until I die. “Since Ayrton started karting at five and did it for 14 years — longer than he was in Formula One — it was not surprising, I suppose, that it made an impression on him.

“At the time there was a pecking order and I was on top, so I guess he could not have left without a fair bit of respect for me. “But I am still chuffed and a little surprised he said it.” Terry remembers how the ultra-competitive Senna had stewed over the 1980 overtaking move. He said: “We were still at the hotel in Italy on the Monday and I was messing around with my mechanic by the pool while Ayrton was sitting around looking miffed.

“I didn’t realise he had clearly decided I was going into the pool and was just waiting for the opportunity. When I turned my back he pushed me quite violently into the water, fully clothed, then laughed and walked away.” West Londoner Terry had been a star of karting since the 1960s, long before Senna joined his Italian team, DAP, in 1978, the beginning of a three-year stint.  Terry had won the British Junior Championship in 1966, ’67, and ’68, and had even starred in a TV ad for Weetabix in ’66, aged 14.

He went on to win eight British Championships and in 1973 reached the pinnacle of his sport by being crowned Karting World Champion. Terry recalled those early days when the young Senna joined his team. He said: “I remember turning up at the DAP factory in May 1978 and being aware of this new kid who was more intense and more focused than the usual driver. “Within a week we were testing near Milan and he was really fast.

“I was suddenly aware there was a gifted kid on the block — just raw talent at 18 but certain to get better. At the end of that day he asked for any pointers about his driving. I told him how I thought he could improve and I think he took it on board. He was willing to learn and tried to copy my style.” As team-mates they were untouchable. DAP boss Angelo Parilla said at the time: “Terry Fullerton and Ayrton Senna are the two best drivers in the world. All the others are capable of good third places, but nothing more.” The competition between them, however, was a foretaste of the intense rivalry Senna would later share with McLaren team-mate Alain Prost in F1. At 25, Terry’s superior experience and technique still gave him the edge.

Terry said: “He was driving very fast but I was the more complete package. He certainly kept me on my toes but he never quite won the big race in karting. “Nevertheless, I, my team and my family were all Senna fans because he was such a blistering talent. You were aware you were in the presence of someone special.” In the 1980 World Championship, in Belgium, Terry won the first of the three races and a second victory would have seen him crowned champion. Leading the field with just seven laps to go in the second race, his engine blew up and his non-finish meant he had to start the final race from the back of the grid.

Still, he fought his way to a third-place finish, giving him third overall. Senna managed second overall but, having failed to win the world title, he moved on to car racing. A family tragedy prevented Terry making the move into cars so he will never know if he could have matched his rival on the F1 track. He explained: “My elder brother Alec was killed in a motorcycle accident at Mallory Park in 1964 and my family turned against the dangerous end of motorsport. “At the time it was very dangerous in Formula One. I heard Jackie Stewart say, between 1968 and 1973, that you had a two out of three chance of dying in F1.

“Plus I was a professional driver, getting paid quite nicely doing what I enjoyed and travelling all over the world. I dated Miss Universe at one time, after she asked me out, so there was no shortage of glamour. Why would I move?” Grand Prix safety had improved markedly by the time Senna joined Formula One in 1984, so news of his death in 1994 after smashing into a wall at Imola came as a hammer blow to Terry. He said: “It was an emotional blow and a hell of a shock. It was like a friend had gone.

“He was so unlucky. They say if a bit of suspension had not hit his crash helmet he would have been able to walk back to the pits.” Terry stopped racing karts in 1984. For the last ten years he has built an impressive reputation teaching up-and-coming drivers and has worked with two-times Le Mans winner Allan McNish, ex-F1 driver Anthony Davidson and current Force India star Paul di Resta. Terry said: “People ask me what the chances are of unearthing the next Senna but it’s pretty remote. He was a once in a lifetime deal.