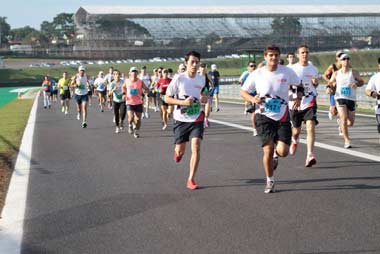 The Terra (Earth) has just announced support for the 11th edition of Ayrton Senna Racing Day.

“We really believe in the projects of the Instituto Ayrton Senna and its social contribution to society and why we support this initiative that, rather than enhancing the sport, contributes to the welfare, health and quality of life, “says Tatiana Gouveia, Trade and Marketing Manager at “Terra”.

The Ayrton Senna Racing Day is a race promoted by the Instituto Ayrton Senna since 2004,at the Interlagos race track in Sao Paulo, a marathon relay for teams of two, four and eight participants at a distance of 42.2 kilometers. This year’s event will be held on November 16, as part of the calendar of the Institute’s activities in 2014 – the year that celebrates 20 years of legacy triple world champion in Formula 1.

Created in 1999, the Earth (Terra) is now one of the references of digital content in countries of Hispanic and Portuguese language with monthly audience of 100 million people. Based in São Paulo and led by Paul Castro, Earth has offices throughout the countries where it operates: Brazil, Argentina, Chile, Colombia, United States, Spain, Mexico and Peru. The Earth also delivers content generated in neighboring territories for Costa Rica, El Salvador, Ecuador, Guatemala, Honduras, Nicaragua, Panama, Dominican Republic and Uruguay.