Bruno Senna believes the conditions in the Malaysian Grand Prix allowed him to prove he deserves his place in Formula One.

Having replaced Rubens Barrichello at Williams questions were asked whether the decision by Williams was based more on money than skill. However, after retiring from the season-opening Australian Grand Prix Senna bounced back with an impressive drive through the field at Sepang to score the team’s first points of the season and he feels that the result proves that he is worth his place in the team on merit after displaying his talent in tricky conditions.

“I am really excited about the result today. I’m so happy that I have scored points for the team after a very tough race. It’s on days like today that you can show what you can do in difficult conditions. I knew we had to attack after the restart, so it was very satisfying to push hard, not make any mistakes and to make my way up through the field.”

Senna said that being able to climb back through the field after the red flag period was “really awesome”.

“It was a good race. When you’re on the move and slicing through the field in wet and dry conditions it’s really awesome and we had a lot of close racing, sometimes being overtaken and sometimes overtaking and the guys did a great job in the team. They gave me a great car so I’m really happy that I managed to bring the car home. Even though at the restart we were dead last we still got home in the points so I’m happy for them and hopefully we can continue to be competitive.”

While pleased with the result Senna added that he hoped the team could continue to move forward and better it later in the season.

“For sure the team has made a good step forward. We have a great bunch of guys in the team, we have a good engine, we have a good package and they develop the car. It’s hopefully going to continue developing and getting quicker and maybe, hopefully, one day challenge the guys in front.” 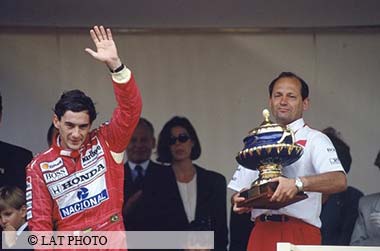 Senna: The Movie – view from paddock

A Tribute to Life Network - 06/11/2011
0
Asif Kapadia’s biographic movie charting the career of Ayrton Senna proved a mesmerising hit in cinemas last winter. It’s now out on DVD and...