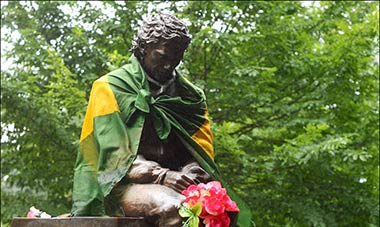 It has long been said that Formula One is all about the passion. And over the past four days in Imola, that passion has been evident, with fans from around the world making the pilgrimage to the Autodromo Enzo e Dino Ferrari to pay their respects to Ayrton Senna and Roland Ratzenberger.

The tribute – fittingly organised by an Italian website called Formula Passion, in conjunction with the Instituto Ayrton Senna and the Imola circuit – began on Wednesday evening, when a special Mass was held at the track to celebrate both Ayrton and Roland. The Mass was led by Sergio Mantovani, the drivers’ chaplain.

“I can’t believe it’s been twenty years,” Mantovani said. “I was there when the accident happened. I remember talking to [Senna] before the race and it seems like yesterday.”

Ratzenberger’s parents were in the front row of the Mass, which was held on the anniversary of their son’s death. “It’s hard for me. But I have to be here to remember my son,” Margit Ratzenberger said.

Thursday saw 20,000 people gather at Tamburello, but by Friday the crowds had disappeared, leaving around 200 to brave the rain as they watched a seven-hour endurance kart race. For those who had stayed on, it was an excellent opportunity to take in the two exhibitions dedicated to Senna at the circuit.

The first, at the Checco Costa Museum just outside the paddock, featured a collection of photographs from the archives of Sutton Images, whose founder Keith Sutton had been Senna’s personal photographer during the Brazilian’s first years racing in Britain. In between the pictures were collections of Senna’s helmets, gloves, and race suits, while the floor was filled with his karts and early single-seater racecars.

The exhibition also contained a selection of photographs donated by the Senna family, featuring Ayrton as a smiling baby, and a young boy proudly steering a simple pedal car around a courtyard.

Inside the paddock was a second display of Sutton’s photographs, which formed part of a multimedia showcase. One of the pit garages had been transformed into an art gallery, with low lighting creating a church-like atmosphere. Here, the fans were silent and reverent, moving between the photographs and stopping before a wall that showed dozens of small screens all playing video of the Brazilian’s career, from races with Murray Walker’s commentary to Asif Kapadia’s film Senna, plus a selection of televised interviews from around the world.

The exhibit ended with Senna’s MP4-4 standing on its own in the dark, lit by a single spotlight against a backdrop of falling rain. It was simple yet dramatic, and delivered a powerful emotional punch.

The rest of the weekend was a far quieter affair, peppered with talks on safety standards and memories of Senna and Ratzenberger, while the track was opened to members of the public so that they too could experience driving around the iconic circuit.

It’s hard to express the emotional impact of walking around Imola, of leaving the pits and walking towards Tamburello in total silence. The only sound was the leaves rustling in the trees, and the air was thick with blossom drifting on the wind. Then, as we approached the 100 metre marker, a marching band struck up the Brazilian national anthem. It was the most powerful moment of an incredibly emotional day.