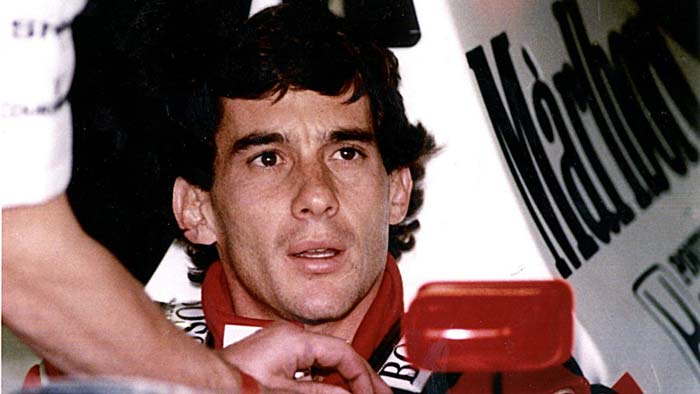 Through some unusual choices, Asif Kapadia has made sure that his documentary, Senna, about the life and career of the Brazillian Formula One hero Ayrton Senna, feels less like a curated collection of artefacts from the past, and more like a present tense drama, unfolding with an immediacy, racing through the here and now.

I spoke to Kapadia recently about his unexpected choices and techniques, about the ethics of his film, and about how this story about sport managed to get its hooks in someone like me, somebody with virtually no interest in the subject at all.

Here is some of what Kapadia told me:

1. The temptation of a sports documentary
Each of my films is a reaction to the previous. My previous film was Far North which was a really tough shoot in the arctic. I came off of that and I heard about the Senna film. For me it sounded absolutely perfect. To go from shooting in the freezing arctic to this film, the absolute opposite. And knowing a lot of it was going to be post production. You know it was quite nice to do something completely opposite from the previous movie.

Anyone that know me knows I am a sports nut and I have always been into all kinds of sport. I try and play when ever I can and I watch everything. And I was into sport long before I was into movies, so for me it was my two coming togethers of my two passions.

I tried previously to do sporting dramas and I think they are very hard to script. You just don’t buy them. You could take a real event, write it down and something doesn’t feel right. With Senna, though, we had an amazing character, a charismatic lead with this epic life – and the key thing was, we had access to all of the footage so it was all real. His story is an amazing movie.

So, why is this a movie? Why wouldn’t you just watch this stuff on a straight to DVD or on TV or on BBC documentary? Why is this a piece of cinema? Why would you want to make a movie about this? Then there are questions like, how do you keep people happy? The hardcore fans, the Brazilians, the people who love Senna, those who have already read every book and seen every race – as well as people who weren’t into sport at all. The people who can’t stand the idea of people running around a circle at 200 miles an hour in a giant cigarette packet. You know, how do you make the film work as a balance for the two of them? And that was really my worry. I felt my job was to somehow figure that out.

My aim was to almost turn everything that was a negative into a positive. The easiest thing would have been to go out and shoot some interviews, which we did do, but I just chose not to use the pictures. So a lot of the voices you hear are from interviews that I shot.

We made it much much more difficult for ourselves, saying we aren’t going to have talking heads. We had to make this original. We had to make this like a movie. We couldn’t just cut to a bloke with a plant on one side and a bookcase behind him saying “Well, Senna was great. He was really fast” and then you see Senna go Nurrooo! around the track.

Somehow we had to find a technique that meant Senna is the one who is going to narrate the story. That certainly isn’t the easiest way to make this move. My hope was that, by staying in the moment and telling the story in the present, those who already know the story get caught up with living the life of him, that they forget where it is going.

The people who don’t know and who maybe had no interest, get drawn up with the energy and the momentum of this amazing drive of his life. And the moments where you had a key race, in Japan in 89 for example, you get so caught up with where you are, you just aren’t worrying about “What year did this happen?” You are in the car, literally with him. It becomes so exciting you just get drawn into it.

There are a lot of movies that spend 100 million dollars, or whatever it costs to make an action scene, and I look at them and I am bored. Because I know it is all a computer game. I know that it is all fake and I don’t buy any of it. I don’t think there is any real danger. But the situation here is that it is all real.

These guys are risking their lives every time they go to work. And the fact that it looks so scratchy, the fact that the camera is shaking around, that is because it is real. So the idea was to say “Everyone else spends millions trying to make it look like this, but what we’ve got is the real thing.”

When someone is driving 170 miles an hour around the streets of Monaco with one hand changing gear, that is so visceral. You realise how dangerous it is. This is where the non-fans start realising “God, these people are from another planet”. What these drivers are doing, they are able to think and then react to things that haven’t even come up yet. They are thinking about two corners ahead. They are not thinking about the corner they are taking, they are already way ahead on the track in their brain.

4. The technology is part of the narrative
As we go through the story everyone in the film is getting older. But as we go through the story, the cars are changing technologies are improving. And the camera’s are improving. So that becomes part of the narrative. By the ending it looks really nice. Because technology has improved. In the beginning you start off with a bit that is super 8, then ome of it is on 16mm, some of it is on 1 inch tape, some of it is on NuMatic. There are all these old defunct video formats and a bit by bitit gets more and more modern. It only goes as far as Beta SD – there is nothing digital by the end of the film.

The way we completed the film is very very modern and technological, especially in terms of the Dolby Digital audio. You get surround sound. But this was part of the challenge technical side for me – on any movie, the technical questions are part is my job. And I wanted to use this all as a virtue. That visual style is very much a part of the story telling.

There is a moment when I realised that there are real people, the families of the people in the film, that I would have to look in the eye after I made the film. Because it’s not all pretend, it’s not fake blood, we were very much aware we have two people who die, for real, on screen. For me, this was brought to a head when I was editing.

You realise that I am not trying to exploit people but it would be crazy not to show what happened. Because the fans know. And, actually, what has actually with the movie is that it has become almost a form of mourning for the fans.

There was a much longer version of the film. There was a lot more material that we’d seen, much of it about “that weekend”. There is no denying it. Anyone that knows anything about formula one, any one that remembers, “that weekend” was a cursed weekend. “That weekend” is a movie in itself. You could easily just make a movie about that, but if you did, you would only see Senna looking unhappy, looking sad, looking down. And the film is about celebrating his life – that was really important to all of us.

You know the number of guys that have said “For twenty years I had been trying to get my wife to understand why I love Senna, and in 100 minutes you managed to explain it.” You know, it’s the short-hand way. Now, even if you are not into it, you understand why other people might be.