Roland Ratzenberger typified the spirit that takes men to the highest echelon of motorsport. He was born in Salzburg in 1962 and began to establish his unusual name in the cut and thrust of Formula Ford 21 years later. By 1985 he had won the Austrian, German and European Championships, and upon his arrival in Britain he already seemed a familiar character thanks to the screen antics of TV-AM’s Roland Rat. Indeed, when I first heard of him we thought it was a humorist cashing In on the name. Whenever we pulled his leg about it he would simply laugh and take it all in good stead. Typically resourceful, Roland actually cajoled some sponsorship from that company on the strength of the ‘link’! 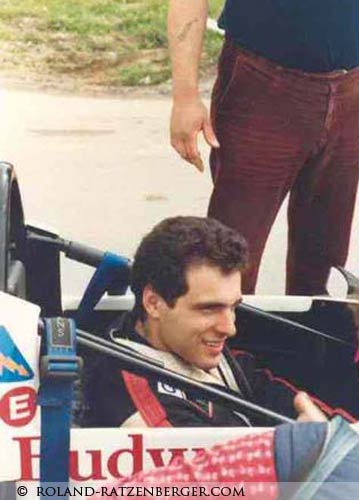 Back in 1987, when he graduated to F3 with Dick Bennetts and West Surrey Racing, my then three year-old son immediately insisted, with a child’s innocence, on dubbing him Roland Ratzenberger-and-chipsand-beans to his face, Roland thought it was hysterical and quickly became a small boy’s hero.

He was that sort of man, gentle, always unfailingly polite, tall, good-looking and with a ready smile. He would always far rather look for the best in people, offering his opinion in that slow, sing-song voice of his. His dedication took him to victory in the prestigious Formula Ford Festival at Brands Hatch in 1986, and after his two seasons of Formula Three he faced the familiar dilemma of what to do next. He opted for Japan, first in saloon cars but later in Formula 3000 and sportscars.

All the time, however, his sights were set on Formula One. In 1991 he tested IndyCar champion Michael Andretti’s Lola and lapped within a tenth of a second of the American star, but plans to move into Formula One with Eddie Jordan’s emergent team went awry at the last minute when his sponsor pulled out. Undeterred, he went back to Japan and continued his impressive progress in Formula 3000 before suddenly becoming a contender for the drive this year with Simtek that eventually took him to Imola.

When I walked into the Imola paddock on Thursday afternoon a hand grabbed my arm and I heard a friendly greeting. As we talked about his Grand Prix debut at T1 Circuit Aida his eyes sparkled, but he was hard on himself and said he thought he should have done better than 11th place. He would always rather have run than walked. I’m glad now that we had that final chance to talk. “Roland had an infectious sense of humour and was a racer who worked for everything that he achieved in motor racing, right from the time when he was his own mechanic in Formula Ford,” said Johnny Herbert, who like so many other drivers had formed a strong friendship with him during their racing days in Japan.

Representatives of the Simtek team paid their own tribute. “With many sacrifices along the way Roland worked his way up to Formula One. He was a true all-rounder whose brave driving style and delightful character will be sadly missed by so many around the world.”

We worried that our tribute to Roland might be overshadowed by what was necessary to do justice to Ayrton Senna, but after deliberation we elected to do the things the way that we have. What is written counts more than the number of words. It was impossible not to feel a great affection for an instantly friendly man who possessed genuine charm and dignity.

I never saw him angry, nor ever heard him bad-mouth another driver. Roland Ratzenberger was on the threshold of achieving his lifelong dream, and was proud to describe his most memorable experience as his first test In an Fl car, at Imola earlier this year.

As we think of him, and offer condolences to his family, the shattered Simtek personnel and his many, many friends, we say farewell to that rarest of Fl characters: a hard racer who nevertheless had not a single enemy within the Grand Prix paddock.