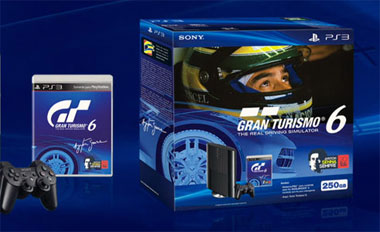 Sony Computer Entertainment of America has announced a “long-term partnership” between the Ayrton Senna Institute and the Gran Turismo series. The announcement was made at the 2013 Brazil Game Show in São Paulo.

According to the announcement content relating to the legendary Brazilian racing driver will be delivered to the game via online updates and will allow players to “trace the roots of Ayrton Senna’s racing career.”

“Ayrton Senna has always been my hero, and I’m honoured to be able to work as a partner with the Ayrton Senna Institute which has carried on his legacy,” said GT creator Kazunori Yamauchi. “If it wasn’t for Ayrton Senna, I don’t think the video game, Gran Turismo, would ever have been developed. Nothing makes me happier than to relay the gratitude of Ayrton Senna Foundation, to all the players of Gran Turismo 6.”

The specifics of the content itself were not detailed.

In addition, an Ayrton Senna Limited Edition PlayStation 3 bundle will also be sold in Brazil. It will include a copy of GT6 along with 25 modified cars and one million credits in in-game cash.

The Ayrton Senna Institute is a non-profit organisation established in 1994 by Senna’s sister Viviane, with a focus on education. Since its founding, schools supported by the Institute have spread to approximately 25 per cent of the cities in all of Brazil, giving more than 17 million children an opportunity to receive education directly. The Institute has trained over 750,000 teachers with their educational programs.

A three-time F1 world champion, Ayrton Senna is revered as one of the greatest racing drivers of all time. Senna was killed in an accident during the 1994 San Marino Grand Prix. Senna’s death remains the last driver fatality in F1.