I was Williams’ test driver at the time and had worked with Senna during the winter. It was the days before email, and the fax was signed by all the key members of the Williams team, wishing me luck for my Formula 3000 race that weekend. I thought that was lovely.

Ayrton’s message was: “Very best to you.” Of course, that stood out for me, as a young fan. 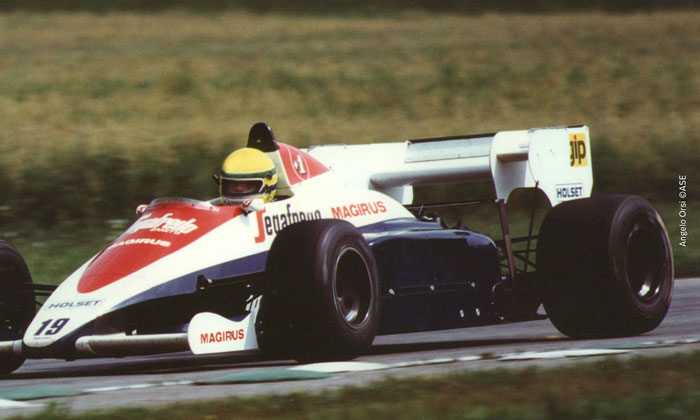 I watched the San Marino Grand Prix between F3000 practice sessions in the truck belonging to the tyre supplier, saw Senna’s crash, and remember thinking: “That doesn’t look good.” It had already been a terrible weekend at Imola, with Rubens Barrichello’s nasty crash on Friday, and Roland Ratzenberger’s fatal one on Saturday. There was death in the air, and that’s part of what made Senna’s accident so shocking. I don’t remember who told me Ayrton had been killed, but I do remember a tabloid journalist coming up and saying: “Are you going to get the drive?

I hadn’t had chance to talk to the team, and I have no idea how I handled it. I was quite shy back then – certainly not as gobby as I am today. Williams ran only Damon Hill in the next race in Monaco, but it was obvious they were going to need another driver. However, at no point was I thinking: “This is my opportunity.” In fact, I told my manager not to ask Williams that question. It was just not appropriate.

I used to go to the Williams factory every week, and at some point Frank Williams said that he was thinking about some other drivers coming to the scheduled Jerez test, which I was going to anyway, to establish who would be in the car for the next race in Barcelona. I did the test in Jerez, and no other drivers did turn up, but Frank did. And as he came through the gates of the circuit, I crashed the car at a chicane they had made of straw bales to slow the cars down. I had been into the gravel before, but this was the first time I had crashed a Williams in two and a half years of testing. I’d never damaged the car before. I got back to the pits, saw Frank, and was thinking: “Oh no!” But he came straight up to me and said: “I’m not going to hold the fact you’ve just crashed my car and cost me money against you. I’m here to tell you that you’ll be in the car for the grand prix in Barcelona.”

At the time, Senna’s death – the causes, the ramifications and so on – was still massive news and there was all sorts of speculation about what had caused the accident. Williams were in shock. They did a lot of analysis on the accident, and as I was part of the team I was a part of that. It was clear it had been an absolutely survivable accident on any other day; it was just terribly unfortunate that the suspension arm penetrated Senna’s helmet. I remember going through the data from the car with Patrick Head, Williams’ technical director, and seeing that the steering load was still there up to the point of impact, and the impact speed was 130mph.

The steering column had broken through the impact of the shunt at the weld point, where it went from a thick column down at the bottom to a narrower diameter at the pedals before continuing up to the cockpit; the standard design practice at the time. Many people, having seen pictures of the broken steering column beside Senna’s car, thought he had gone straight on because the steering had failed. But you can’t have load and a broken column at the same time. The sensor is black and white. So everything was there to tell the engineers that they could send the car back out with confidence. And the thoughts that might have occurred to other people – such as, is it safe to get in this car? – never occurred to me. I was a 23-year-old making my way. You don’t think about death. The thought process is simple – it doesn’t happen to you.

It was a massive wake-up call that it could happen to Senna, the best driver in the world. But the fact that he had been killed by the suspension hitting the helmet – a sort of freak occurrence – in some ways similar to Felipe Massa’s accident in Hungary in 2009, gave some comfort to the other drivers at that time. I know from talking to Damon that it was a lot more difficult for him to compartmentalise the safety of the car. He was older – in his 30s – and he had kids. Of course, everyone was terribly sad about Ayrton’s death but, as history has continually shown, you have to get back down to business. I remember at the news conference introducing me at the Spanish Grand Prix, Frank joked that I’d got the drive because I had a pretty girlfriend.

And I also remember that before I went out for qualifying on the Friday – which was the first time I’d driven the car, because there had been a dispute that meant most of the teams did not run in morning practice – Patrick came on the radio and gave me a pep talk: “Keep it steady, David. No pressure. Just go out and enjoy it.” I got on the radio and said: “Thank you, Patrick, I appreciate that. Just one thing – do I turn right or left out of the garage?”

I could see him fumbling for the ‘talk’ button on his headset to tell me it was obviously right, until he saw all the mechanics were laughing and realised I was just joking. That shows firstly that I felt very comfortable with the team, because I’d been with them for three years, and also that I didn’t feel any pressure, because if I had, I’d have shut up. In many ways, I owe my career to Ayrton’s death. At the time, I was in my third year of F3000 and I had no money. My family had helped me a lot, but the sums were getting too big and they had made it clear I was on my own.

Ronnie Meadows, who these days is sporting director at Mercedes GP, was running the team and together we had scraped together a chassis and an engine for the Silverstone weekend and I was paying an engineer in cash to turn up and do the race. We were at Silverstone to do that race with no budget to do the second one. I had asked Frank if he would help, because I’d be a better test driver if I was racing, and he’d said no. I was not far away from running out of options and heading back to Scotland to run the family transport business, knowing I’d tried everything. The Williams test drive was really important to me, largely because I was paid. It wasn’t a lot in F1 terms – about £30,000, I think – but it meant I could pay my rent in Milton Keynes while I tried to work on my racing options.

Julian Jakobi, who was involved in Senna’s management, told me, in the context of my getting the Williams drive, that Ayrton had been impressed with my testing and suggested I might be a good option for the future. I remember at the time thinking that Ayrton was the best driver in the world; it was unlikely I was going to be as good as him, and all I could do in his honour was give 100% every time I was in the car. That was how I approached it.