Ayrton Senna was the next driver on the scene and stopped his McLaren to help while the rest of the field raced by. He turned off the Ligier’s engine and held Comas’s head upright until medical personnel arrived, in order to make sure that his airway was clear. Comas missed the race, but was not seriously hurt thanks in part to Senna’s help. 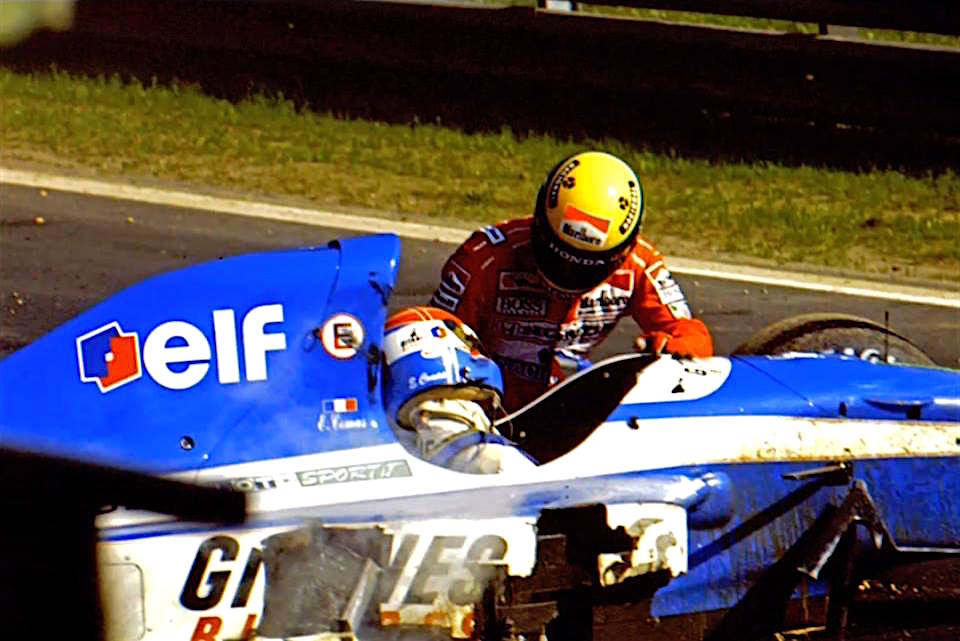 The following is the transcript of an interview where Érik Comas talks about the event:

“I had the bad luck to arrive the first on that curve, from that moment I do not remember anything because I crashed directly to the barriers.

I have no memories of that moment, there are images that I saw later. My memory stopped a few seconds before my crash, and the front left wheel of the car smashed through my head on the right side. It knocked me out like a K.O. in boxing, and the car meanwhile went back to the middle of the track, but I kept, unconsciently, accelerating.

I was unconscious in the car accelerating like crazy. Ayrton arrived and directly heard the crazy sound produced by the engine, the motor was screaming at 7000 to 8000 RPM or something around.

He stopped his car, he ejected himself from it and at his own risks came to my car and stop the engine. Even with the yellow flags, the circuit was still very dangerous, he searched for the circuit breaker and stopped the motor preventing it from burning or even exploding.

After the impact it seems that there were some leaks of fuels so the risk was high. In a few seconds it could have exploded, yes, probably, so Ayrton Senna saved my life, yes.”