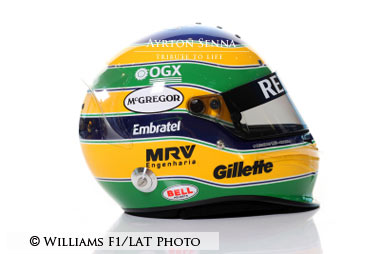 Senna Moeskops asks “As this is your first winter test in F1, how do you prepare yourself to give the team the necessary feedback about the new car?”
Bruno says: “The most important thing was to have lots of meetings with the engineers and to get to know the team and the car as well as possible. Then you know which points to focus on more when you drive the car depending on how the team works. It’s important to understand where the team is strong so it has been useful to talk to the team and to try to address the most important points. Technically we have been very well briefed and hopefully we have a nice base to build from tomorrow.”

Johnny in Macedonia asks “How do you prepare before going out on track? Do you perform any rituals like prayer, meditation, visualisation or do you maybe just listen to music?
Bruno Senna: “Whenever you sit down to get into the zone, if you think too much about the driving, it’s bad news. As soon as I put the helmet on I am in the zone.”

Clare from Bath asks “Do you have a picture to share of your manager [Chris Goodwin] when he used to have hair?”
Bruno Senna: “Nice question! I don’t actually, but I’m sure that I can find one and post it to you guys!”

Good news for Clare from Bath, Karun Chandhok has found a photo of Senna’s manager Chris Goodwin with hair.

‘Long time Williams fan’ Stratos Filalithis asks “What is the best race you have ever watched, excluding those you have participated in, in any category and why?”
Bruno Senna: “There are quite a few. The old classic races in the 1980s were very good because the cars broke down, the tyre strategies played a big part and cars could come from eighth to win a race. Some of Ayrton’s races in the wet were very special like Brazil in 1993 and also Donington that year.”

Peter Vamosi asks “Do numbers have any special meaning for you? Ayrton had 19 in the Toleman and you’ll have 19 this year?”
Bruno Senna: “No, I don’t have any number superstitions at all. When it’s number one, that’s when the number will be special!”

A long-time AUTOSPORT reader from India called Karun Chandhok asks: “Do you still shave your legs?”
Bruno Senna: “Ha! No, I don’t. I should though. Every time I have physiotherapy, all of that hair hurts. Karun should know about that, he should shave his whole body because he’ll lose about two kilos!”

@thegayleasks: “Do you get nervous at all driving for Williams given the history with your uncle?”
Bruno Senna: “No, not at all. I’m very excited about driving for these guys. They have a great history, my family is very excited about it so I am very much looking forward to it. Hopefully it will be nice new chapter.”

Phillipe from Belgium asks “Will you have a Brazilian flag with you in the car like Ayrton did?”
Bruno Senna: “Ayrton had to grab a flag from the marshals! I don’t think the team would be very happy with me if I had one and it came up in my face when I was driving!”

Borislav Kostov from Bulgaria asks :”What do you think about the future of F1 regulations and rule tweaks with the nose really do it for the fans?”
Bruno Senna: “Formula 1 is about image as much as about competition so it’s important for the fans to look at the car and admire it. Sometimes you see some really beautiful cars and the regulations change. But you get used to it. And in terms of competition, the rules are making better racing.”

@eddstrawf1: “There’s a very good website called www.autosport.com I can recommend.”
Bruno: “I go there every once in a while but there are some dodgy people there!”

Sebastian from Slovenia asks: “In what way and to what extent do you follow F1 news on a daily basis?”
Bruno Senna: “I try not to read F1 news. I try to keep up with the team’s rules. It’s very easy to get caught up reading the news and not concentrate on what is going on iin the paddock. It’s better to focus on the news in the paddock.”

Josef Grech from Malta asks “During your driving career, during a race or qualifying, have you ever thought of your uncle and said ‘Yes I do it for him’?”
Bruno Senna: “No. That’s not how it works. I race because I love racing not because I’m trying to bring back Ayrton’s memories. But when I won GP2 in Monaco in 2008 I remembered Ayrton because it is a special place. Sometimes that happens, but it comes after, not before.”

Bogata from Hungary asks “Have you talked to Rubens Barrichello about your new seat and, if so, what did he say to you?”
Bruno Senna: “Yes. I spoke to him when the team decided to take me on board. It was a bit of an awkward chat because we are friends and it’s a difficult situation but Rubens is very experienced and knows how sport works. He has been great. We had a nice chat and he wished me all the best and I wish him all of the best.”

Glenn Freeman asks: “What do you have against AUTOSPORT journalists? Remember what happened at Snetterton in British Formula 3 when you threw your car at me and [then AUTOSPORT man] Richard Asher?”
Bruno Senna: “They had written some bad things about me and I was trying to hit them at over 200km/h! I didn’t manage it because they saw me as you can see from the picture! Glenn is at least prepared to move, Richard is just looking at the car asking ‘what is that?'”

@eddstrawf1: “What did you have for breakfast this morning?”
Bruno: “Cereal, honey and fruit!”

@f1_seat4senna asks “Are you aware of the growing support for him on twitter by fans sites such as @f1_seat4senna and do accounts like this help you to see the support he has?”
Bruno Senna: “Yeah. I’ve been following the progress on that. They have been getting more and more supporters every time. My Twitter account has also grown since I signed for Williams as well. I’ve been trying to post a lot on Twitter, but sometimes have to hold back contentious information about what I had for dinner! And I don’t post personal stuff on Twitter about what I had for breakfast, it’s for the information on motor racing.”

Ademir B Junior asks “You have spent a lot of time working in the factory. How have you integrated with your new team, in particular with Tom McCullough your race engineer?”
Bruno Senna: “It has been very straightforward. Sometimes you get to work with people who aren’t compatible but Tom has been extremely welcoming and nice. We are getting along very well and trying to learn as much as possible from each other. These guys have great experience which is very important for me. We have been talking about procedures I’ve learned in the past from other teams so I’m trying to give as much of what I know to them as well. Tomorrow, let’s hope Tom isn’t too frustrated when I get in the car!”

Rogerio Tuxen from Santa Catarina in Brazil asks: “Do you think that the improvements with this year’s Williams will allow you to fight for victories?”
Bruno Senna: “It’s difficult to say. It’s very early days for testing. I definitely hope that we can fight for points. If we can fight for victories, that would be absolutely stunning but we have to take it step by step. Points are the main goal.”

Daniel Pettit asks: “How much input does a driver get on the test programme the team follows?”
Bruno Senna: “Actually more than I ever imagined. Today we have been looking at a few different bits and pieces while Pastor is driving and even looking at the data can help you to learn some things. Once you drive the car you can start learning what the deficiencies are from a driver’s perspective and you can start having input in terms of leadership. If the driver can be a good leader for the team, it’s a great motivator.”

Bruno Senna: “I’m sure that in the first year it helps a lot to have an experienced team-mate. But I have worked with Nick Heidfeld last year on the technical side so I managed to see how different drivers work. It’s true that you learn a lot, but there are a lot of new experiences coming along and that mitigates against experience a bit.”

Mikael from Sweden says “We are a group of Formula 1 fans in Sweden travelling to Barcelona for the Spanish Grand Prix. What hopes do you have for that race?”
Bruno Senna: “Barcelona is one of my favourite tracks. Historically, I have been very competitive there. I won there in GP2 in 2007, I got a podium in 2008. In the Le Mans Series I’ve been on the podium there. In 2010 in F1 I raced there and it was okay. Historically, I have done well there so hopefully I can do a good job.”

Fabricia Celis asks “Do you have a message for your fans?”
Bruno Senna: “For me, it’s very important that everybody has been giving me such great support. Last year was tough, the winter was tough and I had so much great support. So thanks very much for that. Hopefully we will have a nice year with good results for you guys to enjoy.”