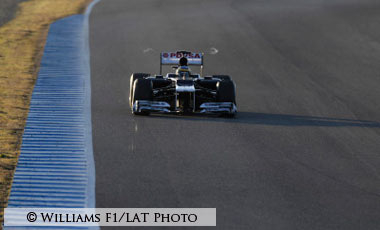 Bruno Senna thinks the second F1 test at Barcelona will show a truer picture than Jerez about where his Williams team stands.

The majority of the Formula 1 teams ran with their new cars at Jerez last week, in the first of three pre-season tests in 2012.

Senna was the busiest man during the test, covering a massive 250 laps, and finishing as 15th quickest overall out of 23 drivers.

He reckons, however, that it is very hard to tell where his team stands, although he believes Williams is on par with other teams in the midfield.

“It’s hard to say. We were not following the same sort of testing programme as everybody else,” said Senna of the competitiveness of the Williams.

“I think we are there together with other guys in the midfield but we will only find out for real in Barcelona when people start doing more straightforward test programmes and then we will see.”

He added: “I think we have a strong platform and we have a few ideas in terms of what we want to do with direction, but you know each track is different. Jerez is very unique track in terms of how it makes the car behave, so for sure we are going to get to Barcelona and learn a bit more about the traditional circuits.”

Senna is confident Williams’s car will be stronger in the next test at Barcelona as a result of the productive work done at Jerez.

“Well we have been testing a lot of stuff in the car to try and improve tyre consistency, to improve it in the high and low speed, every test we did had an objective and we getting to know the car better and this is the main objective of this test at Jerez.

“And now when we come to Barcelona we know the car better, we know the tendencies and the most important thing to know is which direction to go in when we face a problem.”