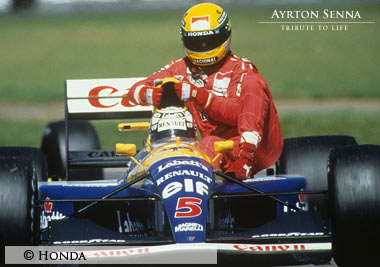 What made Ayrton Senna such an epochal sensation that 217 living F1 drivers voted him Formula One’s greatest driver ever was neither his deranged rivalry with Alain Prost nor the freak accident that claimed his life in Tamburello corner. It’s how he drove whatever car came his way. Like in this clip from 1993—incidentally, against Alain Prost in Tamburello corner.

In Top Gear’s Senna tribute last year, Jeremy Clarkson summed up his essence thus: “Senna was spectacular every single time he got in a car.”

One of those spectacular moments is captured above, at the 1993 San Marino Grand Prix. Senna is in second place. Hot on his heels is Alain Prost, and the cards are stacked hopelessly against Senna, for Prost is driving one of the best Formula One cars ever made, Adrian Newey’s Williams FW15C, with the uncanny active suspension and the 780 hp Renault V10 engine. A full 140 hp more powerful than the Ford V8 in Senna’s McLaren MP4/8.

One would think that on the fast curves of Imola, the McLaren would be nothing but a blip on Prost’s radar. But not with Senna driving. And watch, at the one minute mark, what happens when Prost slipstreams Senna into 190 mph Tamburello and attempts down the inside what would be an easy pass on anyone else. It is completely otherwordly. It’s a jaw-dropping, did-I-just-see-what-I-saw moment.

How do you describe a racing driver who, in seven of the ten seasons of his career, did not have the fastest car, yet made moves like this and got pole position in 40% of his races? What do you call someone who could drive a car like that? For not the first time when watching Ayrton Senna, I am completely lost for words.