The following speech was given by former Grand Prix driver and Indianapolis 500 winner Eddie Cheever from the United States of America for inducting Ayrton Senna into the International Motorsports Hall of Fame.

It is a previledge to be here tonight to induct into the International Hall of Fame Ayrton Senna … When I was asked to induct Ayrton into this Hall of Fame, I tried very hard to get out of the invitation. I spent the better part of a decade racing against Ayrton and watching him do what he could do with a racing car was uh, was really something and uh, when he was taken away from us prematurely in Imola, I can say that I have never seen so many people around the world grieve the loss of an athlete as much as they did when Ayrton left. 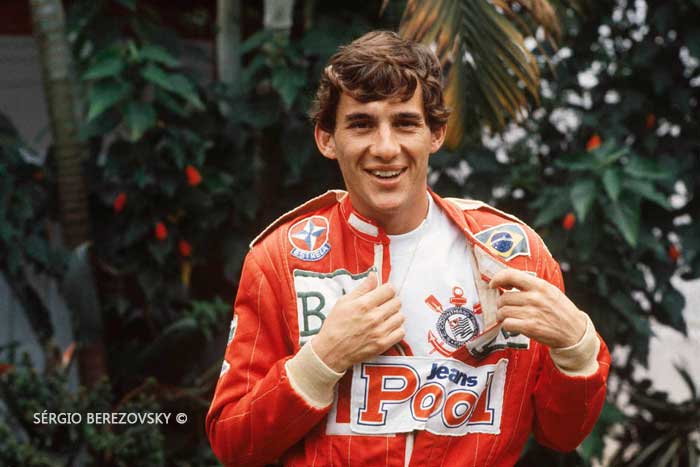 There were no conditions that he was not the best at. When we were driving a 1,000 horsepower Grand Prix car around Monte Carlo in the wet, you knew Senna would be on top. He knew when there was a lot of traffic on the circuit when he was trying to qualify. I don´t know how he did it , he´d always get a clear lap with nobody on it. If there was a difficult corner on the circuit, you´d go watch Senna do it. Senna and Formula One was very similar to what Ben Hogan was to golf. Even his peers would sit and admire what he was doing when they were on the receiving side of it quite a lot in 10 years. A little story I ´ll share with you: In 1984 I was in the middle of my Formula One career.

I was the only American Grand Prix racing driver and I invited my younger brother to come and see me at the British Grand Prix and sent him out on a corner and I thought, just look in the corner and he can see, you know, see what you have to do if you make it to be a Grand Prix driver and he went out and I saw him after practice and he was all happy and I thought I would sit back in my chair and listen to a lot adulations that my brother would have towards my driving. He said, “You ought to see that Senna kid drive!” Needless to say, that was the last Grand Prix I invited him to for a long time, put me right back to zero! Two weeks when I knew I was going to come, I sent a letter to Ron Dennis asking him if he could give me some words or something to say about Senna and I´ll read his letter to you:

“Not only did Ayrton win 3 championships in my cars, but more importantly, he was a close friend. Motorracing requires integrity and strong team play and Ayrton complemented these strengths with his commitment and passion. He was a gifted individual who was a genious behind the wheel of a Formula One racing car and completely focussed on winning. I have no doubt that he would have continued to achieve great things had his life not been cut short. He was a unique individual and I know he is still missed by many today. I am sure Ayrton would have been delighted to be included in the International Motorsports Hall of Fame and I could not think of a more deserving candidate.”

I echo those same words for all the Formula One world and I think that the world is blessed that there are people like Senna that compete in sports and I am very proud that I got to share the same bit of asphalt that he was on and, uh, if anybody who´s watching this tonight wants to become a Grand Prix racing driver, study the films of Ayrton Senna. There has never been anybody better. And with this I would like to invite up the stage a friend of him who is here to accept on behalf of the Senna family, is the Educational Director of the Ayrton Senna Foundation in Brazil, Celos Lemos.“