It may have taken a victory lap at the box office, but Senna, Asif Kapadia’s documentary on the Brazilian Formula One racing driver, won’t even be on the starting grid at next year’s Oscars.

Kapadia’s film is not on the list of nominations that will go on to the next stage of the competition for the best documentary Oscar at the 84th Academy Awards. Other critically acclaimed films, including Nick James’s The Interrupters, which follows a group of former gangsters trying to prevent violence in Chicago, and Werner Herzog’s death-row documentary Into theAbyss, have also been eliminated.

Published late last week, the list, whittled down from 124 entrants by the Academy’s documentary branch screening committee, gives the go ahead to 15 titles. Among them are Wim Wender’s Pina – a 3D dance documentary on German choreographer Pina Bausch; James Marsh’s Project Nim, which tells the story of a chimpanzee raised as a human by scientists in 1970s New York; and We Were Here – David Weissman and Bill Weber’s film on the early years of the Aids crisis in San Francisco. War and the military seem to be popular themes, with three of the films – Hell and Back Again, Semper Fi: Always Faithful and Under Fire: Journalists in Combat – detailing the experience of combat. Elsewhere the longlist features a biopic of the veteran singer and activist Harry Belafonte (Sing Your Song), an insider’s account of a struggling American football team (The Undefeated) and Paradise Lost 3: Purgatory, the third part of a series of films on the West Memphis Three, which was re-edited after the subjects’ release from prison.

Senna, unusual in that is made entirely out of archive TV footage of its subject, performed well at the US box office after winning an award at the Sundance film festival. As such it was a surprise exclusion, but it’s not the first time the Academy’s documentary picks have drifted from critical consensus. Hoop Dreams, Steve James’s documentary following two high-school athletes’ attempts to make it as professional basketball players, was not nominated at the 1995 awards, despite being one of the most critically lauded films of the year. The Academy’s decision prompted US critics Gene Siskel and Roger Ebert to take the unusual step of campaigning for the film to be included.

The rest of this year’s race will see five of the 15 remaining titles receive an official Oscar nomination. These will be announced at the 84th Academy Awards nominations ceremony on Tuesday 24 January. 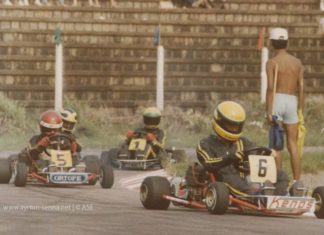 Predict gap between Hamilton and Button and win a signed Senna...

A Tribute to Life Network - 15/10/2011
0
I’ve got a fantastic competition this weekend for JA on F1 readers around the world; we have four signed Senna movie posters and DVDs...