Twenty years ago at Imola Ayrton Senna died competing in the sport he loved. Here we take a look at his world through his own words.

On increasing technology: “The machines have taken away the character and it is the character that the sponsors and public are looking for. At the top, you have a few characters of conflicting personality; the rest, without good results, don’t have any credibility. We must reduce costs so that we return to an era where the emphasis is on people not computers.” 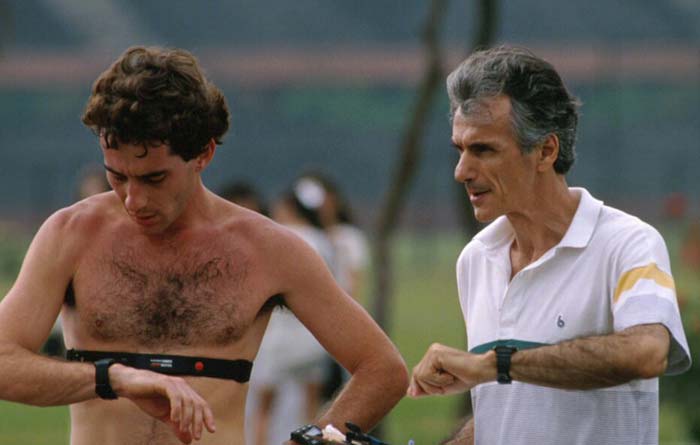 On computers in F1 cars: “I want to be challenged by my own limits and by someone who is made of the same skin and bone and where the difference is between brain and experience and adaptation to the course. I do not want to be challenged by someone else’s computer. If I give 100% to my driving, which is my hobby as well as my profession, I can compete with anyone, but not computers.”

On his relationship with God: “If you have God on your side, everything becomes clear. I have a blessing from Him. But, of course, I can get hurt or killed as anyone can. This knowledge, this need for self-preservation, is what keeps you together. There is no end to the knowledge you can get or the understanding or the peace by going deeper and deeper. I pray regularly, not because it is a habit but because it has innovated my life. I hardly go to church because the only time I feel really good in a church is when there’s nobody there.”

On qualifying at Monaco in 1988:  “I was nearly two seconds faster than anyone else. And suddenly I realised I was no longer driving the car consciously. It frightened me because I realised I was beyond my conscious understanding.”

On his driving philosophy after colliding with Alain Prost at Suzuka 1990: “By being a racing driver you are under risk all the time. By being a racing driver means you are racing with other people. And if you no longer go for a gap that exists, you are no longer a racing driver because we are competing, we are competing to win. And the main motivation to all of us is to compete for victory, it’s not to come 3rd, 4th, 5th or 6th. I race to win as long as I feel it’s possible. Sometimes you get it wrong, sure, it’s impossible to get it right all the time. But I race designed to win, as long as I feel I’m doing it right.”

On improving his relations with other drivers: “If you establish better communication with other drivers, you can talk about things and can speak freely. You must have respect for each other and belief that there is integrity in the competition. If you have doubts, you become very aggressive.”

On life after racing:  “I am trying to find new activities, a source of motivation for when I’ve finished. I believe I will be able to find some real alternatives in business.”

On flipping a coin with Ron Dennis over the terms for his McLaren contract: “Ron wouldn’t give in, so he said: `OK, let’s throw a coin’. It was pretty stupid, and I didn’t have to take the bet, but I said: `OK’. The result cost me $2 million over the three-year period.”

On what drove him: “The most important thing for me is to win. The few seconds of pleasure I get when I overtake or gain a pole position or win a race is my motivation.”

On winning: “Being second is to be the first of the ones who lose. Winning is like a drug … I can’t settle for second or third in no circumstances whatsoever”

On life inside F1: “Most of my friends are from five to ten years ago. I don’t have new friends but I get on well with the young people in Formula One.”

On Nigel Mansell after a collision in the 1987 Belgian Grand Prix: “When a man holds you round the throat, I don’t think he has come to apologise.”

On fear: “To survive in grand prix racing, you need to be afraid. Fear is an important feeling. It helps you to race longer and live longer.”

Speaking on the eve of the 1994 season: “The cars are very fast and difficult to drive. It’s going to be a season with lots accidents and I’ll risk saying we’ll be lucky if something really serious doesn’t happen.”

On the eve of the race at Imola: “My car reacts a bit nervously on this kind of surface. It stems from the special aerodynamics but it’s also got to do with a difficulty in the suspension.”

On being advised to withdraw from the race after Roland Ratzenberger’s fatal crash: “There are certain things over which we have no control. I cannot quit. I have to go on.”

A Tribute to Life Network - 20/11/2017
0
“The main purpose of the foundation is to help children in needs to make their dream come true. This project was what Ayrton wished...