On 21 March, Ayrton Senna would have 56 years and as a way to honor him, the TV Cultura debuted Zupt series with Senninha, unprecedented in Brazilian open TV. Starring the famous character inspired by the pilot, the 2D animation is displayed in between the programming of the station. 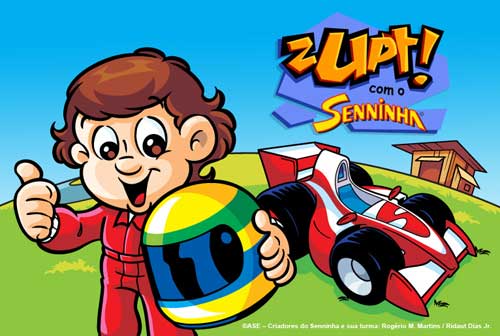 “There could be no better place for the first exhibition of Senninha on TV because the TV Cultura is recognized for its historical investment in programs linked to education.

Through the character we want to take the children concepts such as determination, motivation, resilience, perseverance, friendship, respect and cooperation. Values that our eternal champion Ayrton Senna cultivated in and out of lanes, “says Mauro Ratto, executive manager of Senninha Center of Instituto Ayrton Senna.

“We understand that the sport is substantial source of values for the formation of the child as a citizen. Ayrton Senna has always been an example of athlete and person to all Brazilians.
With Senninha, which carries many of the attributes that made us admire him, we hope to take part of who he was to a new audience who, because of age, you may still not know him very well, but it will certainly have to opportunity to learn from his legacy, ” said Marcos Mendonça, president of Padre Anchieta Foundation, sponsor of TV Cultura.

Senninha is a boy passionate for Speed who dreams of being a pilot. Your world is surrounded by cars, rods, chassis and tires, plus gadgets and powerful tools.
The themes revolve around racing and bring some very important values like friendship, respect for elders, care for the food and the practice of sports. Everything is handled with lightness and humor, bringing these issues to children in a fun and enjoyable way.

The series, consisting of 13 episodes of one minute each, also features three characters: Neco, a mechanical-inventor who creates the jogging strollers from recycled materials; Gabi, a girl who loves arts; and Becão a very playful dog who thinks he’s people. Zupt! with Senninha has made written and directed by the Instituto Ayrton Senna team. The production is the Super Toons.

Conceived and launched by Ayrton Senna, Senninha is a six year old boy who loves speed and wants to be a pilot of Formula 1. With the character, the triple world champion wanted to approach the children with some of his values as determination, motivation and overcoming – the authors are Rogério Martins and Ridaut Dias Jr. Senninha is also an important source of funds for the Instituto Ayrton Senna, because royalties from the licensing of the brand are intended for work that the organization conducts to qualify public education in all regions of Brazil.