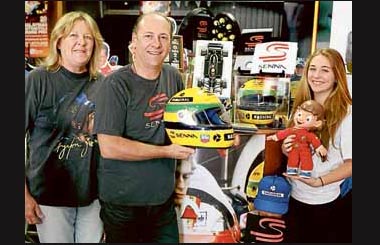 Pat Wedes has turned his passion for motor sport in general, and the late Ayrton Senna in particular, into an international business.

Mr Wedes is most proud of his shop’s official Senna caps and T-shirts which he had shipped over from Brazil.

“After he [Senna] died I tracked down the cap manufacturer in Brazil via the Senna family and mortgaged our house to buy 5000 of them,” Mr Wedes said.

Senna was an advocate for child welfare in his native Brazil and proceeds of all official merchandise bearing his name goes to Ayrton Senna Foundation, meaning Mr Wedes had to pay $25,000 in royalties.

“We knew with the royalty going back to the children of Brazil through the Senna Foundation and this cap not being available to buy [here] it was a good idea.”

Mr Wedes first met the future champ at the Adelaide Grand Prix in 1993 when he approached him in the pits with the idea of giving a talk to motor sport enthusiasts.

The talk never eventuated but the two remained in contact over the years.

After Senna’s death at the 1994 San Marino Grand Prix Mr Wedes continued to stay in contact with the family.