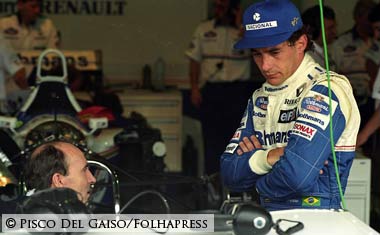 The way he drives around that track is perfect. It’s the smoothest of the driving in the film. It’s like he’s just going to another place.

I would show this film to editors, when we told them we wanted to do the film with all archival footage, and they’d say, ‘Yeah yeah yeah, that never works.’ And I’d show them some from the beginning, some from the middle, some from the ending. And quite few of them were Senna fans, and few of them had ever heard of him. And I’d get to that final lap, and all of them would be in tears. There’s just something inherently in that material that makes people cry.”

Words like transcendence and spiritual come up often in discussions about Senna, a deeply religious man who prayed constantly. “When you talk about religion,” Senna says in the film, “ it’s a touching point, very easy to be misunderstood … But I try hard—as hard as I can to understand life through God. And that means every day of my life—not only when I’m home but when I’m doing my work too.” He never failed to thank God for each victory, in a humble way rather than the current fashion for athletes. “It’s more than just putting it out there for the sake of it,” says Kapadia, “because if you look at the film, he really only speaks about God in Portguese. He stopped talking about God in English, because the English and the rest of the Europeans really jumped on him for it.

Because when you’re doing 200 mph in a car, it’s so easy for someone else to say ‘Well, if you think God’s on your side, that’s dangerous for the rest of us.’ And Prost did say that. So Senna would do these press conferences in English after he won a race and say, ‘Yeah, everything went really well with the gears, and the brakes were going, and all this.’ And then in Portugese, he’d open up and be much more honest and personal, because he was speaking to people in Brazil. And it was a big part of him. It’s just another thing that if you had made it up, no one would believe you. He was a genius in the rain, and there were so many key races when he was losing and it would rain and give him time to catch up, and then he would win and it would stop raining.”

It’s that sense of Senna’s devout faith that makes his final accident seem both all the more heartbreaking, and simultaneously makes it bearable. He’s going to meet his maker, literally. The morning of that race, his sister recounts, he actually reads a Scripture that promises “That he would receive the greatest gift of all, which was God himself.” Kapadia muses: “The tragedy is, at the ending, it’s an act of God, the way he dies. It’s a series of incidences and freaks that had to happen in an exact way. Technically, something had to happen to the car, but then he had to hit the wall at a particular angle for the wheel to come off, and to come off at the exact angle to hit him in the head.

No other injuries, nothing. If the wheel had missed him he’d be fine. That, for me, is an act of God. I don’t know what else to call it. For me, the spiritual element is a major thread all the way through, from the first time he gets in a car and thanks God for giving him the talent to drive the car. And throughout his career, he’s saying I thank God for doing this. And the very last time he’s in a car it’s God that takes him out of the car.”

“I knew the driver,” remembers Kapadia, of the days before he began work on this documentary, “but I didn’t know the man.” Thanks to this film, the world now knows the man, and is richer for it.