While the physical cause of the crash is important, I believe it is also important to examine Senna’s mindset in the final 24 hours of his life. The mindset of a driver is crucial to his performance and to his success. If a driver lacks confidence, then he can lose seconds per lap. If a driver feels uncomfortable, it can have a negative effect on his performance. Inversely, if a driver feels good at the track, he may place higher than expected.

Consider Felipe Massa’s return to the cockpit after his awful accident during the 2009 Hungarian Grand Prix qualifying. Despite flashes of the old Massa, like at the 2010 German Grand Prix, he hasn’t looked as strong as before the accident. Many have commented that he may have lost his edge. Nearly everyone who saw Senna during the Imola weekend reported that he appeared to be out of sorts. The people that knew him said that he seemed distracted. To try to understand what was going on in Senna’s mind in that last day, we must look at the events of the 1994 season and what had happened in the days, weeks and months before that weekend. 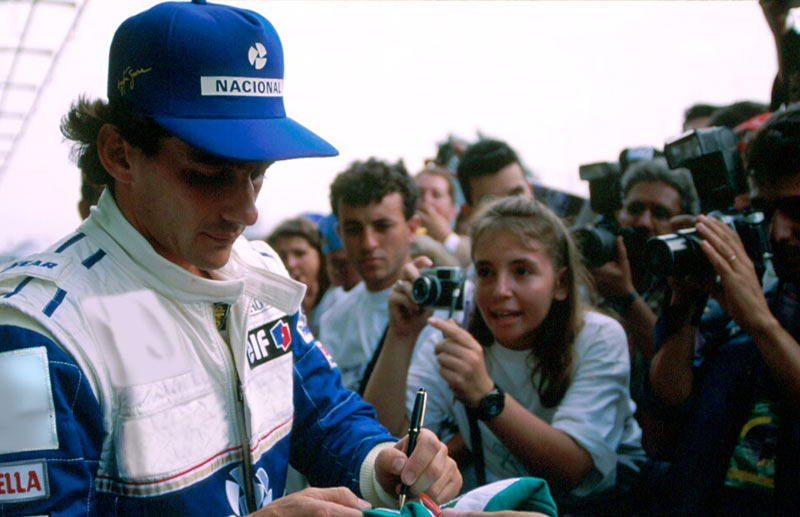 Before the 1994 season, the FIA decided to ban electronic driver aids such as traction control, active suspension, launch control and ABS. There was also a change in tyre regulations; tyres were required to be narrower, which meant that they provided less grip. The idea behind these technical changes was to make racing more exciting by making the cars more difficult to drive. Senna was worried about these changes, saying that the season would be one with “a lot of accidents.” The truth was that they had made the cars more difficult to drive without really slowing them down. The cars were traveling nearly as fast as before, but were twitching and sliding more. Therefore, if there was going to be a crash, it would still be at a very high speed.

Senna was worried about these changes, saying that the season would be one with “a lot of accidents.” The truth was that they had made the cars more difficult to drive without really slowing them down. The cars were traveling nearly as fast as before, but were twitching and sliding more. Therefore, if there was going to be a crash, it would still be at a very high speed. Senna was unimpressed with the FW16. He never felt confident driving it. The car was so twitchy that he was nervous about pushing it to high speeds. He didn’t feel comfortable in the cockpit, and asked for modifications to give him more room.

Senna failed to finish either of the first two races of the 1994 season. Michael Schumacher won both driving the Benetton. Senna was under pressure heading into the San Marino Grand Prix after these two DNF’ and s he was already 20 points from the top of the championship standings. Senna was actually suspicious about Schumacher’s car. In Brazil, Schumacher had a very fast pit stop which allowed him to get out ahead of Senna; he went on to win that race. The amount of fuel that went into the car in that short time surprised everyone. Allegations of Benetton using an illegal fuel rig began to spread. Benetton admitted that the safety filter, designed to limit the flow of fuel, had been removed from the car. The team insisted that this had been the mistake of a junior mechanic.

At the Pacific Grand Prix in Aida, Senna spun out when Hakkinen hit him on the first lap. After that, Senna  watched the rest of the race from the side of the track, rather than return to his pit garage. Senna was listening in particular to the noises the Benetton was making, and to a lesser extent, to the noises the Ferrari was making. Senna was very suspicious of both cars. He thought that he could hear the distinctive sound of a traction control system being used to help control the wheel spin. Many other people were suspicious of the Benetton as well. In fact, Schumacher got off to such a quick start at Aida  that some also thought that the car had a  launch control system.

The FIA did discover a type of launch control system on the Benetton, but they couldn’t prove it had been used in the race. No traction control was ever found on the car. Heading into Imola, Senna had no points, a car he wasn’t comfortable with and was facing opponents who he thought were cheating. At Imola, though, things would get a lot worse for the whole sport of Formula 1. The Black Weekend began when Rubens Barrichello had a very severe accident in his Jordan at the Variante Bassa. Barrichello got his entry speed and line wrong and he hit the inside curb too fast. This launched the Jordan into the air at approximately 140 MPH.

The car hit the very top row of tyres that made up the barrier. If the car had gone just a fraction higher, it would have hit a catch fence and the crash could have been even worse. The Jordan rolled a few times before coming to rest upside down. Barrichello was unconscious. The car was immediately flipped over, which in itself was dangerous considering the driver’s condition. Barrichello was then quickly extracted from the car.

Barrichello was taken to the medical centre and was fortunate to suffer only minor injuries.

On Saturday in qualifying, things became even worse. Twenty minutes into the session, the Austrian Roland Ratzenberger, driving the Simtek, crashed at the Villeneuve curve. As he approached the corner driving about 190 MPH, his front wing had come off. His car was badly damaged and it was clear that Roland was severely injured. After seeing the accident, Senna immediately shook his head and walked out of his garage. He then begged a marshall to take him to check on Ratzenberger. Senna was in tears upon his arrival to the scene of the crash. Later it was confirmed that Ratzenberger had died of a basilar skull fracture. Senna was distraught and sought comfort from Professor Sid Watkins, who was the head of the Formula 1 on-track medical team. As Senna cried on Watkins’ shoulder, they had a now legendary exchange of words.

According to Professor Watkins’ book, Life at the Limit, which I am lucky enough to own, Watkins said to Senna: “What else do you need to do? You have been world champion three times, you are obviously the quickest driver. Give it up and let’s go fishing,”

Senna replied: “Sid, there are certain things over which we have no control. I cannot quit, I have to go on.”

Whatever it was that pushed Senna to drive in Formula 1 and to drive to the extreme, prevented him from quitting. He knew that the level of danger was increasing and that he was at more risk than ever of being in a serious accident. He loved the sport too much to stop. Senna had said before the start of the 1994 season that there would be accidents. At the San Marino Grand Prix, there had been two very serious accidents in two days. His prophecy was coming true.

At the drivers’ meeting on the morning of the fateful race, Senna and other drivers proposed reforming the Grand Prix Drivers’ Association, which had been disbanded in the 1980s. The GPDA was initially created so drivers could have a say in the safety standards that affected them. The GPDA wasn’t technically reformed until two weeks later at the Monaco Grand Prix.

Senna realized that the rules had to be revised in order to protect drivers. Like Jackie Stewart before him, he wanted to be the man who got the job done. The days of Formula 1 that Senna knew were ending. When Senna began, the cars were turbocharged monsters that were extremely fast, but slower around corners. Now, the cars were no longer turbocharged; however, they were still extremely fast and capable of taking corners at these fast speeds. The cars hadn’t been reined in enough, and with recent technical changes, this was incredibly difficult to change.

Considering his behavior in Williams cocpit before the start of the race and the way that Senna had responded to the events of the weekend, many believe that he had a feeling of what was going to happen. I don’t think that this is the case; I believe that Senna was still realizing how dangerous racing had become. I think he was considering whether it was still worth it and whether he could give it all up. Senna had seen one of his closest friends have a very serious accident and another friend suffer a fatal crash. Senna was driving a car that was faster than those of his friends and very difficult to control. He was probably more aware of his own mortality at this point than at any other in his career.

Nevertheless, Senna went on. After the incident at the start involving Pedro Lamy and JJ Lehto, the safety car pulled in and Senna began the fifth lap of the race. This was the third fastest lap set during the race, so Senna had somehow managed to put aside all of the weekends’ events. Entering Tamburello on the sixth lap, his foot was pressing so hard on the throttle that the computer read over 100 percent on the throttle level. He was still as determined as ever to get that win. Whatever caused Senna to suddenly shoot off the road is unknown, but Senna fought to save the car and himself right to the end.

Ayrton Senna was a very spiritual man and this quote, also taken from Sid Watkins’ book, Life at the Limit, is a fitting way to end this piece: “We lifted him from the cockpit and laid him on the ground. As we did, he sighed and, although I am not religious, I felt his spirit depart at that moment”.