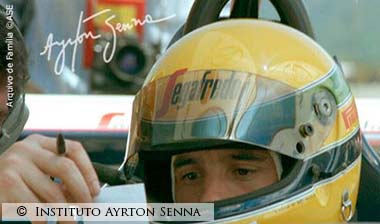 Senna tested for Formula One teams Williams, McLaren, Brabham and Toleman. Peter Warr of Lotus, Ron Dennis of McLaren, and Bernie Ecclestone of Brabham made offers for testing in 1984 and presented long-term contracts that tied Senna to driving later on.

At his test for Williams at Donington Park, Senna completed 40 laps and was quicker than the other drivers including Keke Rosberg. Neither Williams nor McLaren had a vacancy for the 1984 season.

Warr actually wanted to replace Nigel Mansell with Senna at Lotus, but the title sponsor, Imperial Tobacco, wanted a British driver. Senna, however, was determined to drive that season and certainly on his own terms. Senna’s test for Brabham occurred at Paul Ricard in November 1983 and he set lap times two seconds slower than the team’s lead driver, Nelson Piquet who gave Senna the nickname “the São Paulo taxi driver”. Senna impressed the Brabham team and was linked to their second seat, but Piquet convinced the main sponsor Parmalat to sign Roberto Moreno. Consequently, he joined Toleman, a relatively new team, using less competitive Pirelli tyres. Venezuelan Johnny Cecotto was his team mate. During 1984, Senna hired Nuno Cobra to assess his physical condition. Senna had been worried about his condition due to low weight.

Senna made his debut at the Brazilian Grand Prix in Rio de Janeiro. He scored his first World Championship point in his second race at the South African Grand Prix with severe muscle spasms, replicating that result two weeks later at the Belgian Grand Prix. A combination of tyre issues and a fuel pressure problem resulted in his failure to qualify for the San Marino Grand Prix, the only time this happened during his career. Senna’s best result of the season came at the Monaco Grand Prix, the first wet weather race of the season. Qualifying 13th on the grid, he made steady progress in climbing through the field, passing Niki Lauda for second on lap 19.

He quickly began to cut the gap to race leader Alain Prost, but before he could attack Prost the race was stopped on lap 31 for safety reasons, as the rain had grown even heavier. At the time the race was stopped Senna was catching Prost at 4 seconds per lap. Senna passed Prost when Prost stopped in front of the red flag, before the end of the 32nd lap. According to the rules, the positions counted were those from the last lap completed by every driver, lap 31, at which point Prost was still leading. Senna’s second place was his first podium in Formula One.

Senna won the exhibition race to celebrate the opening of the new Nürburgring in 1984 Still in 1984, Senna took two more podium finishes that year—third at the British and Portuguese Grands Prix—and placed 9th in the Drivers Championship with 13 points overall. He did not take part in the Italian Grand Prix after he was suspended by Toleman for being in breach of his contract by signing for Lotus for 1985 without informing the Toleman team first.

Senna also raced in two high-profile non-Formula One races in 1984: The ADAC 1000 km Nürburgring where, alongside Henri Pescarolo and Stefan Johansson, he co-drove a Joest Racing Porsche 956 to finish 8th, as well as an exhibition race to celebrate the opening of the new Nürburgring, which was attended by several Formula 1 drivers, each driving identical Mercedes 190E 2.3–16. Senna won from Niki Lauda and Carlos Reutemann. After the race Senna was quoted as saying: