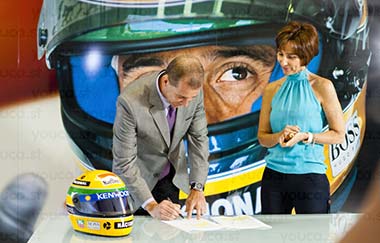 Raizen , licensee of the Shell brand in Brazil , and the Ayrton Senna Institute ( IAS ) , which works to qualify public education in all regions of Brazil , seal the second consecutive year of social partnership for action in the Shell brand gas services .

The lines of the initiative promoted in 2013: the campaign will feature the engagement of consumers , which could help to bring quality education to children and young Brazilians . The mechanics will be performed in positions and also via the internet , through the hot site www.abastecaeajude.com.br . During the month of May , in the act of supply and through the online sale of fuel, some of the money from each liter fueled by Shell V -Power (ethanol or gasoline ) family will go to the actions of the Institute .

Altogether , about 3,000 Shell stations , distributed in 883 cities , 25 states participate in the action. To Raizen , the success of the previous year was no fluke . According to the manager of Brand and Media Raizen , Camilo Reis , the partnership is reflected in the reflection of the goals and values of the company and its stakeholders . ” The real culprits by the number of 185 000 children were covered by our consumers who have placed their trust in the brand and confirmed their commitment to the education of future generations . Together , we are aware that the greatest victory of Ayrton Senna is not in the past , but in the future, ” he says.

For the IAS , the new campaign comes to crown the various actions undertaken in the year that is celebrated 20 years of the legacy of the pilot. ” In 2013 , we won a great visibility and consumer support . For this year the expectation could not be otherwise . The public recognizes the seriousness deposited in each of our programs and for sure we will have great support , “said the marketing manager of the IAS , Irenaeus Villanoeva Junior .

Marketing and advertising campaign. As part of the media plan , structured by agency JWT , the action will have greater intensity in digital media , and print advertising and out of home communication . One of the actions that promises to thrill consumers is the publication of recorded statements with Alan Mosca, designer helmets ; Edgard Mello , journalist and former administrator Interlagos ; and Luis Pascoal Gascón ” Tche ” , the first coach of Senna .

They all bring stories experienced by the champion and details that reinforce your willpower, your humility and recognition by those who had helped in his career . The videos will be posted on the website www.abastecaeajude.com.br and also on YouTube . In addition, 141 posts of Brazil , located in 81 cities, will be celebrating Education Day. On occasion, to be held on May 9 , staff from the offices of the Raizen Shell posts will address consumers in a different way , encouraging even more participation in the campaign .