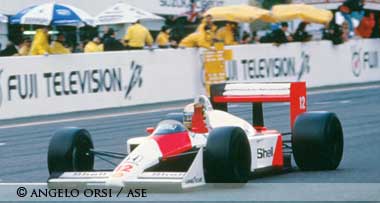 Ayrton Senna collected 13 pole positions and eight wins for McLaren in 1988. But the 1988 world championship would not be an easy to win. In 1988 with McLaren enjoying a season of domination it would have been shocking to find anyone but a McLaren on pole and on the podium.

At the start of the race,the lights went off and Alain Prost shot off into the distance,Senna stalled at the starting line, but somehow managed to start his car.

He started the battle to the top the only way he knew how – fast and focused.By the 3rd lap, Senna was up to 5th place, and 4th place, four laps into the race. He passed Berger and Capelli before getting down to chase his teammate and championship contender Alain Prost. It started to rain somewhere in between.

Then, on lap 27, Senna waited for the backmarkers to come up, and for Prost to hesitate, just a tad. It was enough to pass him, all guns blazing, pulling away, and leading the charge for the remaining laps. He crossed the finish line 13.363s ahead of Prost, and as the 1988 world champion.

“I started giving thanks during the last lap. I thanked God. It was incredible. I could not believe I was going to win the championship,despite all the anxiety and tension. I felt God’s presence. I have seen God, It was a very special moment for me. An indescribable feeling. I feel so much peace.It is as if someone had removed a huge weight from my shoulders and head. It is difficult to understand what it means be a World Champion.” 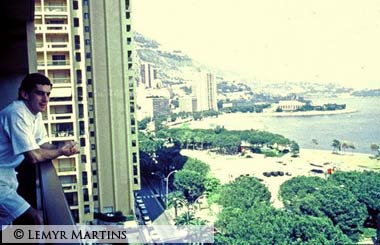 A Tribute to Life Network - 09/08/2012
0
SMUGGLING the late great Ayrton Senna to a Belgian chip shop is not something many can claim to have undertaken as part of their... 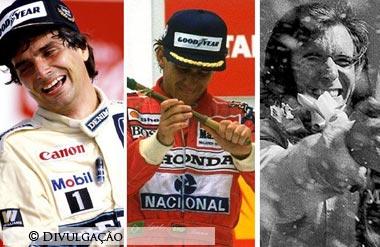 Senna, Piquet and Fittipaldi divide lane for the 2nd time in...

A Tribute to Life Network - 12/01/2013
0
Bruno, Nelson and Pietro surnames represent the Challenge of the Stars. One meeting was on 84 when Ayrton, Nelson and Emerson tested Formula 1. The...