Ayrton Senna is regarded as one of the world’s greatest drivers. Sadly, the sport lost his inspiring talent on 1st May 1994 when he suffered a fatal accident on track at the San Marino Grand Prix, Imola.

It was at Lotus that Ayrton Senna began to see the fruits of his already burgeoning F1® career. Following impressive victories in the Formula Ford, and Formula 3 Championships and following a stint at Toleman the then Team Lotus manager, Peter Warr already had Senna in his sights. When the opportunity came, Warr signed the young Brazilian, Ayrton already being tipped as a star on the rise. It was during the Portuguese Grand Prix in Estoril that Ayrton enjoyed his first GP pole position before delivering a thrilling performance in heavy rain and going onto win his first ever Grand Prix with the Team. 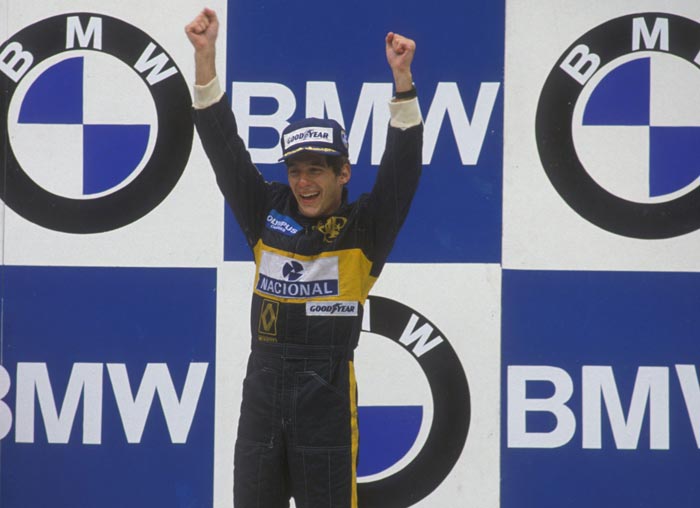 Driving the Lotus black and gold 98T Senna set a remarkable seven pole positions and led the field at Imola, Silverstone, the Nürburgring, as well as Detroit, Brands Hatch and Adelaide. His demeanour was so cool, in the sense he was appeared calm and unruffled when victorious many likened him to Lotus great, Jim Clark. The world knew early on he had a remarkable talent paired with an extraordinary personality. He then went onto his second win for the season at Spa-Francorchamps later in the year.

In 1986, at the Jerez Grand Prix, he beat former Lotus driver Nigel Mansell in a taut race which saw Ayton claim the chequered flag, his competitor a mere fourteen-thousandths of a second behind. He then went onto take victory in Detroit, much to the jubilation of Lotus fans around the world. In 1987, Senna’s last season for Lotus he claimed a further two Grand Prix victories in both Monaco and Detroit.

Ayrton Senna was a character few will ever forget, a force both on track and off, he was a determined spirit that never altered from his course and a much-loved driving hero.