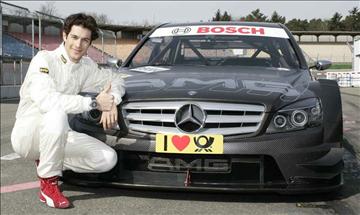 Bruno Senna may still be in the running for a seat at several F1 teams for 2013, but is already exploring other options to ensure he keeps racing.

The Brazilian was the odd man out in a three-way tussle for the seats at Williams next season, with official reserve Valtteri Bottas getting the nod to partner Pastor Maldonado. The team insists that the decision was purely motivated by money, with both drivers apparently able to bring sponsorship dollars to the table, but opting for Bottas has once again cast Senna into the driver market, just as previous stints with HRT and Lotus Renault did in 2010 and 2011.

The Brazilian remains confident that he can land a ride for 2013, and is among the favourites for the vacancies at Force India and Caterham, but was spotted earlier this week testing a DTM-class Mercedes at Estoril in Portugal. It is not the first time that Senna has tried DTM machinery, having previously sampled a Mercedes back in 2009 when he was looking to move on from the GP2 Series. However, he decided not to pursue the tin-top route in order to concentrate on his F1 ambitions, and drove for Colin Kolles’ sportscar squad instead.

Should he now be interested in the DTM, Senna would join a list of F1 alumni being connected to the series for 2013, with both Jaime Alguersuari and Alex Zanardi rumoured to be in negotiation with BMW. The Italian has already tested a specially-adapted version of the marque’s title-winning car, while Alguersuari claims to have had an offer from Munich but is holding off agreeing terms in order to exhaust his options of an F1 return.