The morning of the day I rode shotgun in a McLaren Senna with Bruno Senna at the helm during the hill climb at the Goodwood Festival of Speed started off with potential disaster. Some smug coach bus driver got his bus stuck in the main Goodwood parking lot entrance even after being told the bus would get wedged in because it was too big to fit through. He didn’t listen. The line of traffic already waiting to enter quickly became a traffic jam and my ride to the Goodwood Festival of Speed from the hotel was delayed.

Would I miss my scheduled time in one of the newest and most extreme hypercars cars in the world with the nephew of a Formula 1 legend and an accomplished racing driver in his own right? Nope. I managed to get there in time thanks to an alternate route (the bus was still stuck for hours), given my helmet, and met Bruno Senna at the paddock where the orange McLaren Senna waited. This is also the first pre-production model off the line, which will later be shipped to the Senna family in Brazil. We were told the day’s hill climb schedule was running on time. And then it wasn’t. For whatever reason that had nothing to do with the bus, a slight delay turned into well over an hour, so Senna and I got to talking. 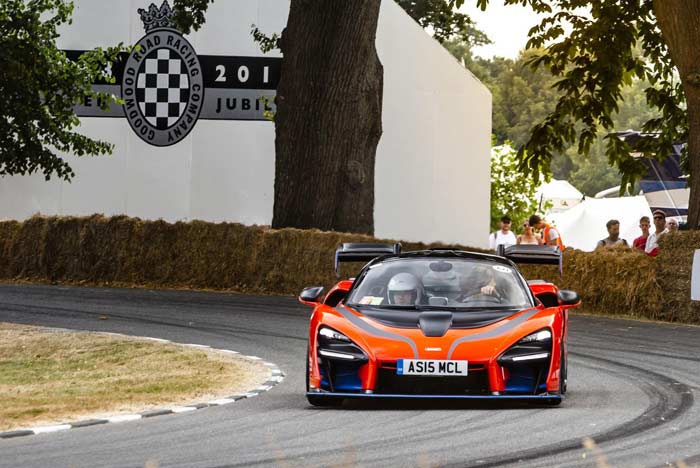 We talked cars, racing, and life. Mostly the first two. We talked about his uncle and how Ayrton Senna’s greatness was not only at the track but also through his charities, which still exist today. Bruno Senna is currently a factory driver for the McLaren GT3 program. The Goodwood Festival of Speed, celebrating its 25th anniversary this year, is perhaps the greatest car show in the world. McLaren, Ferrari, Lamborghini, Bentley, Rolls-Royce… you name it, they’re all here along with a seemingly endless number of retired race cars. Porsche is also marking its 70th anniversary and it’s easy to spot the massive tower with several models, including a 917, 918, and 911R, mounted at the top overlooking the entire festival.

And then there’s the hill climb. Beginning on Thursday, day one of Goodwood, drivers do practice runs in supercars and hypercars and a few lucky passengers, such as yours truly, get to join the fun. This was Senna’s second practice run and he would get a third one in before today’s grand finale where drivers, sans passengers, go all out in timed runs. There will be a winner. But it’s all for fun because everyone, public, media, racing drivers and automakers alike come to Goodwood to celebrate cars and speed. It’s a shared passion among the 150,000 or so in attendance each day of the four-day festival. What was it like to experience speed in a McLaren Senna? Let me put it like this: I’m now determined to go to racing school.

I’ve officially caught the bug, symptoms of which I’ve detected for some time ever since I drove a BMW M235i at the Nurburgring and Spa back in 2016. That was thrilling despite taking both circuits embarrassingly slow. It was anything but slow in the Senna with Senna. Its twin-turbo 4.0-liter V8 makes 789 hp and weighs a mere 2,641 pounds thanks to liberal amounts of carbon fiber. Its entire body is made of that lightweight weave. Output is directed to the rear wheels through a seven-speed dual-clutch gearbox. For the record, Senna prefers to keep it in manual mode and use the paddle shifters because of course he does. Zero to 124 mph happens in a claimed 6.8 seconds. I can attest to that.

The racing harness keeps you stationary. The helmet is a safety requirement. Top speed is 208 mph and only 500 units are planned. The 500th Senna build slot was auctioned off last winter and the winning bid was nearly three times the car’s 750,000 pounds UK (about $1 million USD) price tag. All proceeds were donated to the Ayrton Senna Institute, which provides education for nearly two million underprivileged kids in Senna’s home country of Brazil. Back to the hill climb ride: When the light turned green, Senna accelerated the Senna to a blistering speed through a somewhat curvy and narrow track lined on both sides with hay and people.

The hill climb itself lasted no more than a minute and it was a hell of a rush that’s hard to describe. Senna owners will understand. There is no other hypercar in the world like the McLaren Senna. There will never be another driver on par with its legendary namesake. Bruno Senna is one of the most humble and down to earth guys I’ve ever met, and a true track talent. His uncle would be proud. Ayrton Senna would also be enthralled with the McLaren Senna and McLaren as a whole. He’d also thoroughly enjoy himself spending a few summer days at the Goodwood Festival of Speed.