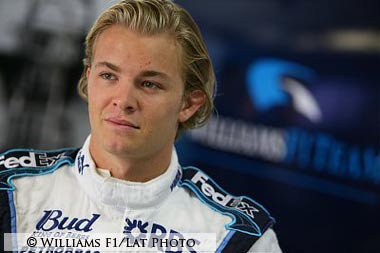 NEW DELHI: Two deaths on the track over the last week have once again put the focus back on safety in motorsports.

However, when the talk shifts to some of the fastest cars in the world in Formula One, there has got to be some optimism. No one has seen tragedy on the F1 track from as close quarters as Nico Rosberg – that too at a very young age.

Nico was just nine years-old when Ayrton Senna crashed his Williams into a concrete barricade at Imola on May 1, 1994. The memories are still fresh in the Mercedes GP driver’s mind as he gets ready to hit the Buddh International Circuit (BIC) for the inaugural Airtel Indian Grand Prix on October 30.

“I was just watching the movie Senna on my flight from Germany last night. Those were really tough times for the sport as we lost some fine drivers to accidents on the track. There was a constant fear within you,” Rosberg said. F1 fans in India will get a chance to see Asif Kapadia’s documentary Senna at a special screening in the Capital on Friday.

Nico’s father Keke, the 1982 world champion, was one of the contemporaries of Senna along with greats like Alain Prost and Nigel Mansell. “After the Senna incident, I was of course concerned about the safety of my father. I always got tense when he hit the track,” he said at an event to promote Bajaj Allianz’s ‘Drive Safely’ campaign.

The 26-year-old driver though is happy with the various safety measures in F1 currently. “We have various safety precautions in place like the HANS device. Not to sound too arrogant, but the F1 cars are also driven by the best drivers in the world,” Rosberg said.

One of the other safety measures proposed in an F1 car is a jet canopy over the driver’s cockpit. The move could provide additional safety to the drivers in a highly volatile sport.

“I have heard that the jet canopies were tested at the FIA institute recently. The need for this was highlighted after Felipe Massa nearly lost his eyesight, hit with a spring that flew out of Rubens Barrichello’s car.

Some F1 tyres weighing as much as 20kg were bounced off the canopy and merely deflected off. We have spoken about it in the Grand Prix Driver’s Association meeting and hopefully this is one suggestion that will be implemented soon,” Rosberg, who was the youngest driver to set the fastest F1 lap at the age of 20 in 2006, said.

On the progress of the Mercedes GP car, he said, “We are very close to Ferrari. Although we haven’t got the results this year, next year we’ll definitely be in the top three. The team has employed two of the best technical personnel and I am sure we’ll take the big step forward next year.”

For the time being, Rosberg is more concerned about exploring Delhi, saying, “We have the day free tomorrow (Wednesday), so planning to go around the city and probably hit some of Delhi’s bars. I had a chance to taste some of Indian cuisines like paranthas and dal this afternoon, so I’m waiting for some more nice experiences.”