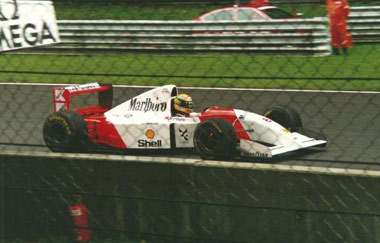 According to the most accomplished Formula 1 racing drivers including Michael Schumacher, there is a driver whose talent and accomplishments have not been beaten by anybody yet. That man broke many records including the youngest triple World Champion (he was 31 years and 227 days old at that time) or the most consecutive pole positions – 8. If you are a Formula 1 fan, you will know how difficult that it is. Pole position is the number one starting place, that the drivers fight for. Your starting position may define your final one.

We are talking about Ayrton Senna. Born in Brazil in 1960, drove his first go-kart at the age of four. To moment of his death in 1994 at Tamburello corner of the 1994 San Marino Grand Prix, he had become a three-time Formula 1 World Champion, placed his car on pole position for 65 times (a then-record), 41 times won the races, and more.

What made Senna so massively successful in such short period of time? (only 10 years of Formula 1 racing, from 1984-1994). The Formula 1 experts like Martin Brundle (who was a F1 driver himself, and is a F1 commentator for BBC from 2009), say that he had unbelievable talent for fast and perfect driving, orientation, intuition.

But talent plays a small role in the formation of great accomplishments. It is like a raw diamond that remains insignificant until it is converted into a gem through cutting, which requires skill, as diamonds are hard and brittle. Just like the diamond cutting, Formula 1 racing requires high level of skills and dedication to accomplish anything. A raw diamond in itself does not present a high value.

How do you manage to improve in a stressful environment ?

There are certain character traits that are important like dedication, passion for winning and the mechanics of the car, hard work( he started racing as a young boy). Those elements were important but still not enough. There was something else that finally defined him as the champion.

Ayrton Senna, to become better than his rivals and improve skills, worked on his body and mind. Physical fitness accompanied by sharp intelligence and concentration became unbeatable.

That third part- his ability to concentrate during races, was the key to his incredible success, when the smallest mistake in driving could have lead to big troubles,. An ability to remove the  insignificant thoughts from his mind, was the defining factor. It lead to the greater speed, precision and winnings.

How to achieve that? How to be able to concentrate only on the task you work on, and not on stress, other tasks that need to be done, exterior sounds, etc?

Concentration, a skill that can be learned, helps you remove from your thoughts  that what you do not need. You begin to operate your own mind. There are simple exercises that lead to the groundbreaking results.

Before a particular race, he would sit on a couch and think only about the coming event. In his thoughts, he would drive the car from the start to finish, every single corner, felt the speed, imagined the way his bolid would behave, his own reactions of emotional power, certainty and physical strength. He saw himself winning, overtaking other drivers, perfectly aligned with the car. It took him about one hour. He would usually repeat it.

The scientists that deal with human brain discovered that it does not differentiate between an imagined event and a situation that you really experience. They say, that visualizations equal real life situations. If you react emotionally to them, your brain would send similar signals to the cells of your body and memory.

It leads to a powerful conclusion… when you imagine an event, you make it highly possible for your mind to create it in the “real” world in the future. That is what Ayrton Senna did.

Plus… when he thought about a coming race, he absolutely closed his mind to anything else. And then… during the race, it was much easier to bring the concentration back, and to remove the stress produced by the elements like the screaming fans, other people, sounds, the possible problems, his own pain.

He was once asked about his state of mind during racing. He replied:

“It’s always a task for me,” he said, “given my personality characteristics, my education, and my weaknesses and my strong points. But it is fundamental to concentrate as deep as I can and therefore isolate all outside interference — the fans, the people around me.

“Being able to go in that direction, I somehow can get in a level where I am ahead of the next corner. Ahead of its braking, of changing down, of applying the power. So it lets me predict what is ahead, what I’m going to face and to correct it before it actually occurs.”