Senna began his racing career in karting. He moved to motorsport competitions in 1981 and was champion two years following the British Formula 3 Championship.

His good performance in previous categories led to his debut in Formula 1 Grand Prix of Brazil 1984 team Toleman-Hart.

In his first season in the category, Senna had results quickly, leading to small British team to obtain performances never reached. The following year, changed the Toleman-Hart by Lotus-Renault team for which he won six Grands Prix over three seasons. In 1988 he joined Frenchman Alain Prost (who would be his biggest rival in his career) at McLaren-Honda and years lived by the victorious team. The two together have won 15 of 16 Grands Prix that season, and Senna has won the world champion for the first time.

Prost took the championship in 1989, Senna regained the title in 1990 – both titles were decided by collisions between riders in the Grand Prix of Japan .The following season, Senna won his third world title, becoming the youngest driver to win a third championship in Formula 1 – a feat that still remains to this day. Since 1992, the Williams-Renault team dominated the competition widely. Still, Senna managed to finish the season as runner-up in 1993, winning five races. Negotiated a transfer to Williams in 1994.

His reputation as a fast rider was marked by record of pole positions he held from 1989 until 2006. On wet pavement, showed great ability and skill, as demonstrated by experiences in the anthology of Monaco GP 1984, Portugal in 1985 and Europe 1993. Senna still holds the record for most wins in the prestigious Monaco Grand Prix – six – and is the third most successful driver of all time in terms of victories.

In December 2009 the British magazine Autosport published a story where he made an election to choose the best F1 driver of all time. The magazine consulted 217 pilots who went through the class, and Ayrton Senna won such a vote. 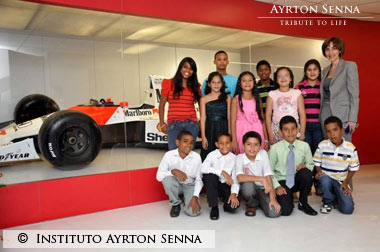