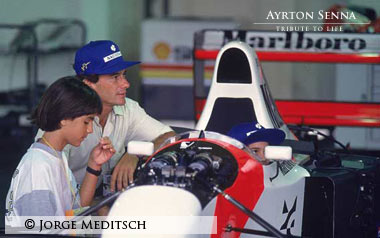 Alain Prost returned from a year’s sabbatical to join the team that had routed the 1992 World Championship. With champion Nigel Mansell defecting to the Indy Car championship the second Williams would bear the number zero and be driven by ex-test driver Damon Hill, son of twice-champion Graham.

Another son-of-a-champion had found a berth with a major team – Michael Andretti, who replaced Gerhard Berger at McLaren. In another major change for the Woking team Honda had left and Ford engines would be used instead – though not the top specification ones used by Benetton. Blocked from moving to Williams by arch-rival Prost, Ayrton Senna stayed with the team on a race-by-race basis.

Derek Warwick returned to Formula One with Arrows after a two-year absence. Riccardo Patrese had left Williams and taken his immense wealth of experience to Benetton to partner Michael Schumacher, Martin Brundle having fallen victim to the wrath of Flavio Briatore.

Hot on the heels of the all-conquering FW14B, most other teams were developing active suspension and traction control systems to match those of Williams. The FIA had introduced some measures to attempt to restrict the performance of the cars, specifically by reducing the rear wheel widths.

Senna shines in the wet

Qualifying for the first round of the season at Kyalami produced no surprises – Prost comfortably took the pole. In the race Senna briefly got ahead but after a few passing attempts Prost squeezed through and made his escape. Hill spun on the first lap, belying his lack of race experience, before eing taken out on lap 16 by Alessandro Zanardi’s Lotus.

Prost won despite a late rain shower but lost out in a similar cloudburst at Interlagos two weeks later, leaving Senna to take his second home win. Senna won again in the wet at the one-off European Grand Prix at Donington Park, embarrassing Prost who finished a lapped third. Thus Senna lead the championship with 26 points to Prost’s 14.

Prost got back on track with victory at San Marino – in fourth place was JJ Lehto for Sauber, one place higher than he had been in Kyalami when he scored points for the team on their debut. Prost won again in Spain and Andretti finally got points – for fifth – having crashed or spun out of the four previous racesâ€¦

The Monaco Grand Prix was set up as a battle between Senna and the Hill dynasty – each with five wins at the principality to their names. Senna took a record sixth with Hill a fine second, Prost fourth after stalling during his pit stop and Jean Alesi giving Ferrari their first podium finish of the year.

After Monaco Prost really got into his stride with four consecutive wins in Canada, France, Britain and Germany. But the story in the latter two rounds was the performance of Hill, who led both only to be let down by his car. At Benetton, Patrese was struggling. After Germany he had taken just one podium finish while Schumacher had seven.

If the action on-track was disappointing, off-track the political recriminations were reaching fever pitch. FIA President Max Mosley made his objections to traction control and active suspension explicitly clear when, at the Canadian Grand Prix, he declared the team’s interpretation of the rules to be illegal and promised to ban the technology.

Hill finally broke his duck at the Hungaroring after Prost stalled on the grid at the start. He turned this into a hat-trick of wins by triumphing at Spa-Francorchamps and Monza as well.

But the sport had a lucky escape in Belgium when Zanardi cheated death in a huge shunt at Eau Rouge caused by failure of his active suspension system. The FIA readied themselves to ban the driver aids and, controversially, introduce refuelling for 1994.

Prost could have wrapped up the championship at Monza but suffered a rare engine failure. Andretti took his first ever podium but it would his final start for McLaren – Miki Hakkinen replaced him at the final round. At the chequered flag the Minardi team mates crossed the line seventh and eighth, but only Pierluigi Martini had his wheels on the ground as Christian Fittipaldi shockingly tagged the back of Martini and somersaulted through the air, somehow landing the right way up. Another lucky escapeâ€¦

Hakkinen stunned the Formula One world by out-qualifying Senna at Estoril, but on race day he crashed out spectacularly. Prost led but Schumacher stayed out instead of pitting for tyres, taking the lead. Berger survived a bizarre accident when he lost control of the car on the bumpy pit lane exit and spun in front of Warwick who was flat out on the main straight. Prost, unwilling to risk the championship, followed Schumacher home, took his fourth title, and announced his retirement. Senna grabbed the Williams drive with both hands.

Senna drove the last two races like he’d already moved to Williams, winning both from Prost. He courted controversy in Suzuka when he punched Jordan newcomer Eddie Irvine who dared to un-lap himself while racing for sixth place with Warwick. Irvine took a point on his debut after pushing Warwick into the gravel at the chicane.

At Adelaide he led home Prost and Hill, and looked set to dominate the title the following year. No-one could have imagined they had just seen Senna’s final win.