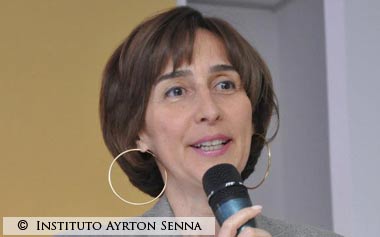 Viviane Senna, president of the Institute of Ayrton Senna – Ayrton Senna Foundation, is invited to the next “Breakfast Estadão ESPN Radio.”
Presenters Haisem Abaki and Mia Bruscato receive the entrepreneur, on the 26th (Monday) from 8am to 9am, live in the studios of the station, within the program in the Air Estadão 1st Edition. The meeting will also be broadcast live on TV and made available on Estadao.com.br portal.

Businesswoman, sister of the triple world champion Ayrton Senna also and mother of Bruno Senna, Viviane Senna is president of the Ayrton Senna Foundation, which opened in London in June 1994 and the Ayrton Senna Institute, based in Sao Paulo. Named by CNN / Time Magazine as one of the Leaders for the New Millennium, is the only Brazilian member of the group “Friends of Adult Children of the World Award” alongside Queen Silvia of Sweden, Nelson Mandela, former president of  South Africa, and Jose Ramos Horta, Nobel Peace Prize

The “Breakfast-Estadão ESPN Radio” happens on the last Monday of each month within the Air Estadão 1st Edition. The proposal is to bring to the studios most important names in different areas to chat live with the presenters and columnists of the attraction of the morning broadcast.