One lazy Sunday afternoon in 1999 I lay on the couch with my Dad watching the Formula One Belgian Grand Prix on TV.  As my Dad yelled at the screen urging David Coulthard to ‘Push On’,

I stared in amazement at the cars that looked very different to the Maruti 800 we owned. The sport seemed to instantaneously excite me. Of course, I did not understand the nuances back then, but it just seemed so much better than the NASCAR game I played on my Dad’s PC.  He pumped his fist as David Coulthard took the chequered flag and fell back into his seat, content.

‘Me?’, he laughed, ‘These men are not regular drivers, son. They are driving Gods.’

‘Of course. It takes a lot of fitness, discipline and talent to do what they do.’

‘Oh, that’s easy’, he announced with a smug look of pride, ‘Ayrton Senna.’

And then, he told me about the man who was born to race.

You see, my Dad, like millions of other people, was a mad fan of Ayrton Senna. So who is Ayrton Senna? What makes people, including most Formula One drivers, respect and worship this man?

Senna, like most racing drivers, began his motor-sport career on go-karts. His brilliance was first noticed when he won the British Formula 3 championship after a closely fought battle with Martin Brundle. His Formula One career started with Toleman in ’84. He made his debut at the Brazilian Grand Prix in Rio de Janeiro and my God, what a career it was!

So what made Senna so good at what he did?

Martin Brundle, who raced against Senna throughout his career once looked at a qualifying lap of Senna and said – ‘I can’t do that.’ Senna had a sixth sense of what was going to happen. The feel of where the grip is, which I call the ‘Senna Sense’ and of course, his bravery to go in for insane cornering and overtakes and being successful at it. He was a master of qualifying laps and in his career, he won a staggering 65 pole positions. As a matter of fact, he once out-qualified his legendary team mate Alain Prost by a mind boggling one and a half seconds.

Ayrton Senna had an utterly ruthless attitude, too.  Brundle explained, “He always put us in a position where if you challenged to overtake him, you would have an accident. He would leave it up to you to choose whether to have that accident or not. If you backed off, he knew every single time in the future, he would have you.”

Senna once said in an interview to Sir Jackie Stewart, “By being a racing driver you are under risk all the time. By being a racing driver means you are racing with other people. And if you no longer go for a gap that exists, you are no longer a racing driver because we are competing, we are competing to win. And the main motivation to all of us is to compete for victory, it’s not to come 3rd, 4th, 5th or 6th. I race to win as long as I feel it’s possible. Sometimes you get it wrong? Sure, it’s impossible to get it right all the time. But I race designed to win, as long as I feel I’m doing it right.”

The genius of Ayrton Senna, however, was brutally cut short as he suffered a fatal crash at Imola in 1994. On lap 7, Senna’s Williams F1 car coming out of the Tamburello corner at around 200 mph ran straight off the track and smashed into a concrete barrier, tearing off the right front wheel and nose cone and came to a halt. As the crowd sat stunned, Senna remained motionless in the cockpit.

Professor Sid Watkins, the official F1 doctor and dear friend of Ayrton rushed to attend to him. He later reported – ‘He looked serene. I raised his eyelids and it was clear from his pupils that he had a massive brain injury. We lifted him from the cockpit and laid him on the ground. As we did, he sighed and, although I am not religious, I felt his spirit depart at that moment.’

He raced in Formula One from 1984 till his death in Imola in 1994 and during that time, he won the F1 World Drivers Championship three times. The news of his death spread like wildfire. The Brazilian government performed his funeral with full military honors. Millions mourned the loss of a hero, a role model. He was a staunch Catholic. He was an extremely compassionate man, who quietly spent millions on helping poor children. He had plans of starting a foundation and  after his death  the  ’Instituto Ayrton Senna’  came into existence with Alain Prost, his arch rival, as a trustee.

In 2010, a documentary named ‘Senna’ was released. I had tears in my eyes at the end of it and I urge everyone to watch it. Not just for his racing genius but also for the man he was.

It’s been 18 years since he passed on but he lives on in the hearts of true racing fans.

Ayrton Senna da Silva is the Greatest Racing Driver that ever lived. 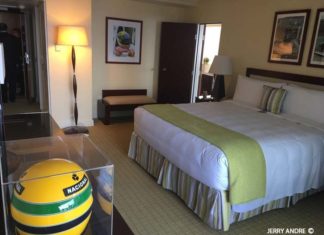 A Tribute to Life Network - 26/10/2015
0
Lewis Hamilton has no burning desire to emulate any other driver in Formula One's glittering history after he matched Ayrton Senna's haul of three...