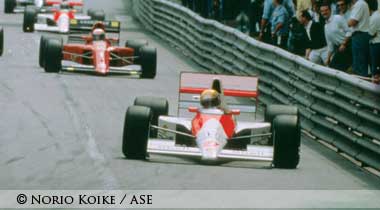 Born on 21 March 1960, Ayrton Senna is arguably the finest formula One driver to have lived, having died in 1994 in a tragic accident at the San Marino Grand Prix, it’s time to honour his birthday with some of his finest moments in what is now a legendary career.

Where better to start than his homeland? Born in Sao Paulo, Ayrton Senna was, and is, a national hero, alongside the likes of football legend Pele. Despite his legendary career, it wouldn’t be until 1991, seven years after his debut, that he would win his home Grand Prix. He was leading the race but close to the end he lost fourth gear, and with Nigel Mansell’s Williams catching him, it didn’t look good for Senna.

However Mansell retired with his own gearbox issues, but after losing third and fifth gears also, Senna had to stay in sixth gear. Mansell’s team mate Riccardo Patrese was catching his McLaren quickly, but Senna held on and finished 2.9 seconds ahead of Patrese. He suffered muscle cramps and fever before passing out in his McLaren cockpit on the slow-down lap. He famously screamed over the radio when he crossed the line, out of pure ecstasy and pain. After the race Senna said: “I kept thinking, ‘it’s gonna be ok, it’s gonna be all right. Keep going.’ I tried everything I know.”

After his death in 1994 around three million people lined the streets of Sao Paulo for his funeral. The Brazilian government declared three days of national mourning and was a national tragedy, as Brazil lost one of its heroes.

The most successful driver around the streets of the principality, Some of Senna’s most memorable moments are from the famous circuit. He made his name here in 1984, as in torrential conditions, he took a non-competitive Toleman and nearly beat the mighty McLaren’s. He qualified 13th before storming the grid, overtaking Niki Lauda, that year’s world champion, for second before hunting down Alain Prost. The race was stopped on lap 31, due to the adverse weather conditions, but Senna passed Prost as the red flag came out, thinking he’d won the race. However the classification counted the last lap all drivers completed, which was lap 31. But this was Senna’s announcement on the big stage.

Also 1988 saw him leading by over 50 seconds, prompting Ron Dennis, McLaren boss, to tell him to slow down, Senna ignored him and with 11 laps left he span and crashed into Porter. This caused the Brazilian to hide away in his apartment and not speak to anyone.

Often cited as the most intense rivalry in Formula One, Senna and Prost often came together, most notably in 1989. Team mates at McLaren, it was a dream team, two world champions in the all dominant McLaren, however a psychological war broke out between the two, almost dividing the team. The Japanese Grand Prix at Suzuka would determine who’d win the title, with Senna and Prost both battling for it. They were racing for first when they collided at the final chicane both going out, or so we thought. Senna managed to get his car going, re-entering the track cutting the chicane, he managed to win the race, before being disqualified for exceeding track limits.

By cutting the chicane Senna was deemed to have not re-entered the track legally, but the underlying consensus from that race was that then F1 supremo Jean-Marie Balestre swayed the race in favour of Prost, a fellow Frenchman. Senna was given a $100,000 fine as well as a six month suspension of his super licence, which was later rescinded. 1990 saw Prost sign for Ferrari, as he couldn’t work with Senna due to the troubles. However a repeat case, both fighting for the title, at Suzuka it could be determined, Prost and Senna on the front row, Senna didn’t yield to Prost going into the first corner and crashed into him, a move Prost later called ‘disgusting.’ Senna won the title, in somewhat controversial circumstances.

The 1993 European Grand Prix was held at Donington Park in England. Senna had qualified fourth and what became of the race was one of Senna’s finest. He was bogged down at the start by Michael Schumacher and fell to fifth, in very poor weather conditions. He passed Schumacher at the third corner, before sliding past Karl Wendlinger at the Craner Curves, with the two Williams’ in his way, Senna dispatched Damon Hill at McLean’s before passing old nemesis Alain Prost at the Melbourne hairpin, going from fifth to first in one lap in torrential rain, he went on to win by over a minute lapping every car but one. Arguably the greatest ever lap in Formula One.

Senna is an idol to many drivers, including most notably Rubens Barrichello and current world champion Lewis Hamilton. In a 2004 poll by F1 Racing magazine, Senna was voted number one in their ‘best drivers of all time’ issue. His sister Viviane set up the Instituto Ayrton Senna foundation, which helps young children in Brazil and provides opportunities. Also he saved fellow driver Erik Comas’ life in 1992. In Friday Practice for the Belgian Grand Prix, Comas crashed at Blanchimont, as Senna passed he stopped and got out of his McLaren, ran across the track and turned off Comas engine before holding his head in a stable condition until the medics arrived.

Another memorable moment is the lift he received from Nigel Mansell in the 1991 British Grand Prix. Senna’s car had ran out of fuel on the final lap, so he was out of the race. As Mansell won on the slow down lap Senna flagged him down and Mansell allowed him to sit on his Williams as they drove back to the pits, a wonderful moment from two of Formula One’s powerhouses.