I was two years old when Ayrton Senna died. When i grew up and i started having interested in the F1 sport, i started reading about AS. And he became My favourite Driver. I searched in the web for a tribute to his life and i want to present it to you.

Ayrton Senna da Silva was a Brazilian racing driver and triple Formula One world champion. He remains the last Grand Prix driver killed while driving a Formula One car.
A kart racer from an early age, Senna won the British Formula 3 championship in 1983 and made his Formula One debut with Toleman the next year. He moved to Lotus-Renault in 1985, and won six Grands Prix over the next three seasons. 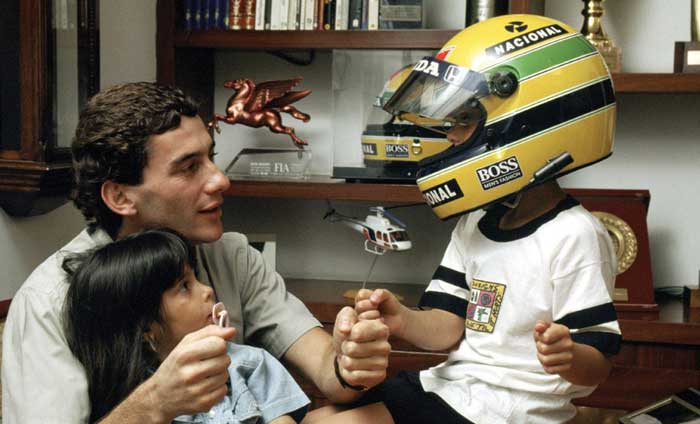 In 1988 he joined Frenchman Alain Prost at McLaren-Honda, the top driver and team at the time, and won that year’s Formula One World Championship. He and Prost developed a heated rivalry, which is regarded as the bitterest in F1 history. Senna won the championship twice more, in 1990 and 1991. In the next two years with McLaren, despite driving an inferior car, Senna won races and challenged for the 1993 world title, finishing runner-up to Prost. He switched to the then dominant Williams Renault team for the 1994 Formula One season.

At the third race of the year millions of fans witnessed his fatal crash live on global TV coverage during the San Marino Grand Prix at the Autodromo Enzo e Dino Ferrari.
Also notable was the unique duality of his character. Senna’s competitive nature on the track was in stark contrast to his humane and compassionate exploits off it. A deeply religious man, he reportedly donated the bulk of his fortune to create the “Ayrton Senna Foundation”, with the aim of helping poor and needy young people in Brazil and around the world. Eventually becoming concerned with the potential dangers of his sport, he helped to push for the organization of a driver safety group shortly before his final race.

Senna was born in São Paulo. At school he excelled in gymnastics, art and chemistry but found mathematics, physics and English difficult. The son of a wealthy Brazilian landowner, he developed an interest in motor racing at an early age. Senna entered karting competition at the age of 13. In 1977, he won the South American Kart Championship. He later finished runner up in the World Championship on several occasions – but never won. In 1981 he began competing in Europe, winning the British Formula Ford 1600 championship. He was champion in British and European Formula Ford 2000 the following year.

He also adopted his mother’s maiden name, Senna, as da Silva is a very common name in Brazil. In 1983, Senna won the British F3 championship after a closely fought and at times controversial battle with Martin Brundle. He also triumphed in the prestigious Macau Grand Prix with Teddy Yip’s Theodore Racing Team which was closely related to the West Surrey Racing team he drove for in British F3.

For 1994, Senna finally signed with the Williams-Renault team. Prost’s contract clause forbidding Senna from joining Williams did not extend to 1994 and Prost retired with one year left on his contract, rather than face the prospect of being a teammate of his greatest rival.
Williams had won the previous two World Championships with vastly superior cars, and Senna was a natural and presumptive pre-season title favorite, with second-year driver Damon Hill intended to play the supporting role. Between them, Prost, Senna, and Hill had won all but one race in 1993. Benetton’s Michael Schumacher had won the remaining event. Pre-season testing showed that the Williams car had speed, but it was difficult to drive.

The FIA had banned electronic driver aids, such as active suspension, traction control and ABS, to make the sport more “human”. The Williams was not a well-handling car at the start of 1994, as observed by other F1 drivers, having been seen to be very loose at the rear. Senna himself had made numerous (politically careful) comments that the Williams FW16 had some quirks which needed to be ironed out. It was obvious that the FW16, after the regulation changes banning active suspension and traction control, exhibited none of the superiority of the FW15C and FW14B cars that had preceded it.

The surprise of testing was the Benetton team, whose car was more nimble than the Williams although less powerful. The first race of the season was in Brazil, where Senna took pole. In the race Senna took an early lead but Schumacher’s Benetton was never far behind. Schumacher took the race lead for good after passing Senna in the pits. Senna refused to settle for second.

While trying for a win, he pushed too hard and spun the car, stalling it and retiring from the race. The second race was the Pacific Grand Prix at Aida where Senna again placed the car on pole. However, he was hit from behind in the first corner by Mika Häkkinen and his race came to a definitive end when a Ferrari driven by Nicola Larini also crashed into his Williams. Hill finished second while Schumacher took victory again.

It was Senna’s worst start to an F1 season, failing to finish or score points in the first two races, despite taking pole both times. Schumacher was leading Senna in the drivers’ championship by twenty points. Luca Di Montezemolo is quoted saying that Senna came to him the Tuesday before the Imola race and praised Ferrari for the battle against electronics in F1. Senna also told Montezemolo that he would like to end his career with Ferrari.

At the third race of the season, the San Marino Grand Prix at Imola, Senna declared that this was where his season would start, with fourteen races, as opposed to sixteen, in which to win the title. Senna again placed the car on pole, but he was particularly upset by two events. On Friday, during the afternoon qualifying session, Senna’s protégé, the then F1 newcomer Rubens Barrichello, was involved in a serious accident that prevented him from competing in the race. The next day, Austrian driver Roland Ratzenberger was killed in a practice accident.

Senna spent his final morning meeting fellow drivers, determined after Ratzenberger’s accident to take on a new responsibility to re-create a Drivers’ Safety group to increase safety in Formula One. As the most senior driver, he offered to take the role of leader in this effort.

Senna and the other drivers all opted to start the Grand Prix, but the race was interrupted by a huge accident at the start line. A safety car was deployed and the drivers followed it for several laps. On the restart Senna immediately set a quick pace with the third quickest lap of the race, followed by Schumacher. As Senna entered the high-speed Tamburello corner on the next lap, the car left the track at high speed, hitting the concrete retaining wall at around 135 mph.

Senna was removed from the car by Sid Watkins and his medical team and treated by the side of the car before being airlifted to Bologna hospital where Senna was later declared dead. What had likely happened was that the right front wheel had shot up after impact like a catapult and violated the cockpit area where Senna was sitting. It impacted the right frontal area of his helmet, and the violence of the wheel’s impact pushed his head back against the headrest, causing fatal skull fractures.

A piece of upright attached to the wheel had partially penetrated his helmet and made a big indent in his forehead. In addition, it appeared that a jagged piece of the upright assembly had penetrated the helmet visor just above his right eye. Any one of the three injuries would probably have killed him. As track officials examined the wreckage of his racing car they found a furled Austrian flag — a victory flag that he was going to raise in honour of Austrian Roland Ratzenberger, who had died on that track the day before. To this day, the cause of the accident has still not been fully determined after many court cases, including Williams being investigated for manslaughter though the charges were later dropped.

*In my oppinion and many others Ayrton Senna had been killed by a natural theory.
Geforces Killed him. I dont agree with the fact that the suspension hit him. AS was dead before hitting the wall.